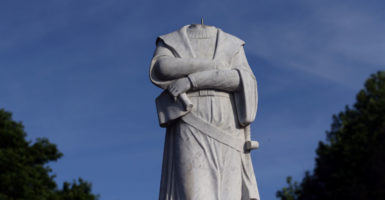 Mobocracy is coming to America.

A debate over policing, race, and history has degenerated into general lawlessness, as mobs have swarmed and destroyed statues in our biggest cities from coast to coast.

And these mobs have hardly been discriminating.

They’ve attacked people of a multitude of creeds, races, and religions: white, black, and Hispanic; Catholic, Protestant, and Hindu.

All in the name of purging, in the words of many activists, “systematic racism,” and various other sins inherent in our country’s past, present, and future.

Unfortunately, this sort of mob justice is unlikely to bring us to a kind of post-racial utopia, a heaven on earth. More likely it will bring us straight to perdition, where free government disintegrates and we become a nation of men and mobs, not the law.

Mobs Fueled by Hatred of America

As I wrote in my book “The War on History: The Conspiracy to Rewrite America’s Past,” this slippery slope of statue toppling was a natural progression for those who believe that American and Western civilization are built on nothing but malignancy.

The movement was supercharged by the now Pulitzer Prize-winning “1619 Project,” which is finding its way into K-12 curriculum around the country.

Slavery and racism, according to the 1619 Project’s carefully constructed narrative, were at the heart of America, not liberty and the principles of 1776.

In an interesting way, the 1619 Project embraced the Confederate view of America. It constructed the argument that America is a country built on the cornerstone of slavery, rather than Abraham Lincoln or Frederick Douglass’ view that America was conceived in liberty, but existed alongside an institution deeply at odds with the basis of its creation.

Unsurprisingly enough, Lincoln and Douglass barely make an appearance in the 1619 Project’s essays.

One way or another, what has transpired in recent days has become worse than simple denunciations of statues and figures of America’s past.

When a statue of George Washington was lit on fire and toppled by a mob in Portland, “1619” was scrawled across it. After all, if our nation was founded on the evils of racism and slavery, what respect should we show to the father of our country?

Indeed, the ethos of the 1619 Project is being used to animate mob violence and destruction in this country. That may be exactly what the project’s leaders wanted: The creator of the 1619 Project, The New York Times’ Nikole Hannah-Jones, tweeted (and then later deleted) “it would be an honor” in response to a New York Post op-ed by Claremont Institute’s Charles Kesler calling the riots of late the “1619 riots.”

Why Is No One Stopping the Mob?

As we saw on Father’s Day weekend, in cities across America, lawless vandals are defacing and pulling down statues, destroying public property, often as police and authorities essentially stand down and watch.

Regardless of what one thinks of any particular statue in this country, a nation of the people, by the people, and for the people requires deliberation in a public process for any kind of removal to take place.

Now, the few dictate to the many, with force, what statues stay up and which come down. Most simply come down.

In addition, politicians have seemingly been eager to meet the demands of this movement, and the whims of the mob, by jumping ahead and removing statues and the names of historical figures, often with little legal justification.

This is mob rule, pure and simple, and it’s what our system is devolving into in cities around the country, as Matt Mehan, the director of academic programs at the Kirby Center, deftly explained in a thread well worth reading on Twitter.

Mob rule is the path through anarchy to tyranny.

Nobody explained better how this sort of law would lead to the end of free government in America than Abraham Lincoln.

Lincoln denounced mob rule as a young man in his famed Lyceum Address to citizens of Springfield, Illinois, in 1838. It is one of the most important speeches he ever delivered and a dire warning for us today.

On top of that, and more importantly, Americans had inherited from the founding generation “a system of political institutions, conducing more essentially to the ends of civil and religious liberty, than any of which the history of former times tells us.”

That was true in Lincoln’s time and it’s true in ours.

Lincoln then famously said to his countrymen that America, even in that early stage of development—surely a far weaker international power than it is today—could not be conquered by foes from without.

So what, Lincoln asked, could threaten such a country, from where will danger approach?

“I answer, if it ever reach us, it must spring up amongst us. It cannot come from abroad. If destruction be our lot, we must ourselves be its author and finisher. As a nation of freemen, we must live through all time, or die by suicide,” Lincoln said.

He then explained how he was now seeing an “ill omen” for his country’s future as “mob law” was exploding across America.

Lawless destruction and violence was becoming common. Americans had been targeted for violence, often for petty offenses (real or imagined), and sometimes for the color of their skin. But eventually lawless violence came to all, white and black, men and women, young and old.

Lincoln explained that if this general state of lawlessness is allowed to go on, where perpetrators who violate the law go unpunished and are generally unrestrained by the rightful authorities, it will create a chilling effect for law-abiding citizens who will lose faith in their government to protect them.

Lincoln said of where this all ends:

It is imperative for Americans, and especially our leaders, to heed these words of Lincoln and put a stop to the anarchy that threatens to submerge our constitutional system.