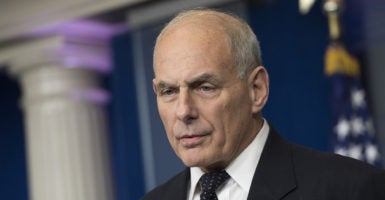 “I would tell you that Robert E. Lee was an honorable man,” says White House chief of Staff John Kelly. (Photo: Kevin Dietsch/UPI/Newscom)

White House chief of staff John Kelly condemned the removal of Civil War monuments as “dangerous” and referred to Confederate Gen. Robert E. Lee as an “honorable man” on the Monday night debut of “The Ingraham Angle.”

Laura Ingraham, the show’s host, asked Kelly, a retired Marine general, to comment specifically on the recent removal of a plaque honoring former President George Washington from the church he attended.

“I would tell you that Robert E. Lee was an honorable man,” Kelly told Ingraham. “He was a man that gave up his country to fight for his state, which 150 years ago was more important than country. It was always loyalty to state first back in those days. Now it’s different today. But the lack of an ability to compromise led to the Civil War, and men and women of good faith on both sides made their stand where their conscience had them make their stand.”

The comprehensive interview covered a number of topics, including Kelly’s recent public condemnation of Rep. Frederica Wilson, D-Fla., who disparaged President Donald Trump for a condolence call he made to Gold Star widow Myeshia Johnson.

Kelly’s characterization of the Civil War as the result of a failure to compromise sparked a dramatic backlash on social media among academics and journalists, who accused Kelly of whitewashing the conflict.

Kelly "on both sides'ed" the Civil War.
Good people on both sides who should have compromised.

The arrogant assertions of "history"
The lack of understanding of the good and bad in our history.
The ugly messages in those assertions…. pic.twitter.com/XgUtI56zl9