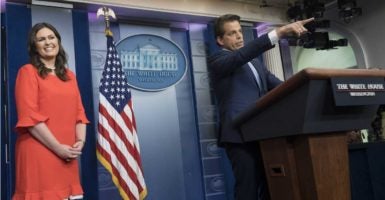 Sarah Huckabee Sanders has been conducting the bulk of White House briefings for months, and will likely have a seamless transition into her job as new White House press secretary after being around politics most of her life.

Anthony Scaramucci, the new White House communications director, who fielded questions Friday, has TV experience, political experience, and Wall Street experience, but this will be his first government job.

“Sarah will be the press secretary,” Scaramucci said. “The president loves Sarah and thinks she is doing a phenomenal job. I agree with him.”

He also praised the departing Spicer, despite reports that said Spicer resigned because Scaramucci was hired. He said Spicer wanted to “clear the slate,” and expressed support for his patriotism.

“I hope he goes on to make a tremendous amount of money,”Scaramucci said.

Spicer, who will remain at the White House through August, weathered many bitter confrontations with the press over stories concerning Russia’s interference with the 2016 presidential campaign, the attendance for Trump’s inauguration, and various other matters.

Sanders read a Trump statement about the communications staff shake-up.

“I am grateful for Sean’s work on behalf of my administration and the American people,” Sanders said. “I wish him continued success as he moves on to pursue new opportunities: Just look at his great television ratings.”

Spicer will serve the administration through August, she said.

On the new communications director, Sanders read this statement from the president:

Anthony is a person I have great respect for, and he will be an important addition to this administration. He has been a great supporter and will now help implement key aspects of our agenda while leading the communications team. We have accomplished so much, and we are being given credit for so little. The good news is the people get it, even if the media doesn’t.

Scaramucci told reporters he and Priebus were like brothers, which is why they rough each other up sometimes. But Scaramucci said he would be reporting directly to the president, and not the chief of staff.

“I have no problem” working for Priebus, he said, but added that when he was on Wall Street, “No one worked for me, people worked with me.”

“They have a difficult boss to work for, because the president believes he is his own communications director,” Kumar told The Daily Signal. “It is difficult for the whole communications team when they don’t have a strategy to respond to the next tweet.”

Scaramucci founded hedge fund SkyBridge Capital, valued at more than $11 billion. He recently sued CNN for a story alleging he had business ties to Russia, but accepted the network’s apologies after three reporters were forced to resign and CNN corrected its mistake.

An attorney, he said he would be equipped to handle questions on Trump’s legal team regarding the investigation of Russian interference with the presidential campaign and charges that the Trump campaign “colluded” with Russia.

Sanders is the daughter of former Arkansas Gov. Mike Huckabee, who was a Republican presidential candidate in 2008 and 2016 and is a former Fox News TV host.

Sanders worked for her father’s campaigns and was an Ohio field coordinator for President George W. Bush’s 2004 re-election campaign. She also helped found Second Street Strategies in Arkansas. She was listed in Time’s “40 Under 40” in 2010.

She also worked on the campaigns of Sens. Tom Cotton and John Boozman, both Arkansas Republicans. In February 2016, after her father dropped out of the Republican presidential primary, she joined the Trump campaign.

Like her father, Sanders graduated from Ouachita Baptist University, where she was the student body president.

Kumar said Sanders’ experience with campaigns and being part of a political family will be a big help, but said nothing fully prepares an individual to be the president’s top spokesperson.

“Working with campaigns means working with reporters and learning how responding to the press’s needs helps your candidate,” Kumar said. “Nothing truly prepares you for the presidency, either for the president himself or the White House staff.”