Netflix CEO Says ‘Cuties’ Is Misunderstood, but ‘Speaks for Itself’ 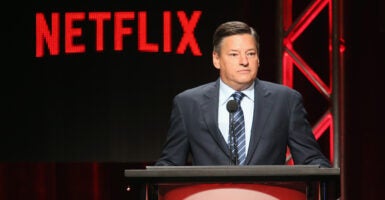 “It’s a little surprising in 2020 America that we’re having a discussion about censoring storytelling,” Sarandos said Monday, according to Deadline.

“It’s a film that is very misunderstood with some audiences, uniquely within the United States,” he continued. “The film speaks for itself. It’s a very personal coming of age film, it’s the director’s story, and the film has obviously played very well at Sundance without any of this controversy and played in theaters throughout Europe without any of this controversy.”

His comments come after news that a Texas grand jury has indicted Netflix, Inc. for “lewd visual material” in “Cuties.”

A Netflix spokeswoman told the Daily Caller News Foundation Oct. 6 that “Cuties is a social commentary against the sexualization of young children. This charge is without merit and we stand by the film.”

“Cuties” not only includes many close-up shots of little girls’ crotches and buttocks, but also depicts them viewing pornography and discussing sexual acts and shows one girl photographing her genitalia, among other explicit scenes, a review by the Daily Caller News Foundation found.

“It’s an award-winning film and a powerful story about the pressure young girls face on social media and from society more generally growing up—and we’d encourage anyone who cares about these important issues to watch the movie,” a Netflix spokeswoman previously told the Daily Caller News Foundation.

Many film critics have defended the film, calling it “provocative,” “powerful,” “extraordinary,” and emphasizing film director Maimouna Doucouré’s assertion that the film is a critique of the hypersexualization of young girls.

Netflix did not immediately respond to a request for comment from the Daily Caller News Foundation.