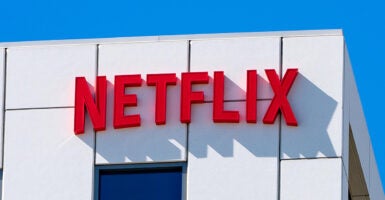 “’Cuties’ is a social commentary against the sexualization of young children,” a Netflix spokeswoman told The Daily Caller News Foundation late Thursday. “It’s an award-winning film and a powerful story about the pressure young girls face on social media and from society more generally growing up – and we’d encourage anyone who cares about these important issues to watch the movie.”

Great. Maybe @Netflix would like to come talk this over before Congress https://t.co/wuQkPM5zzi

The statement comes after the film ignited furor on social media over its representations of young girls and suggestive dancing.

“Cuties” not only includes many close-up shots of little girls’ crotches and buttocks, but links young girls to pornography and discussions of sexual acts and includes a child photographing her genitalia, a review by The Daily Caller News Foundation found.

After initial criticism of “Cuties” when the film’s trailer was released, Netflix apologized for the artwork promoting the movie.

“We’re deeply sorry for the inappropriate artwork that we used for ‘Mignonnes’/‘Cuties,’” a Netflix spokeswoman told The Daily Caller News Foundation on Aug. 20. “It was not OK, nor was it representative of this French film which premiered at Sundance. We’ve now updated the pictures and description.”

The posters originally depicted young girls dressed in outfits they wear in the final dance competition, striking suggestive poses. The posters closely resemble the actual dancing that occurs in “Cuties” during that final dance scene.

“I discovered the poster [at] the same time as the American public,” director Maïmouna Doucouré said in an early September interview with Deadline. “My reaction? It was a strange experience. I hadn’t seen the poster until after I started getting all these reactions on social media, direct messages from people, attacks on me. I didn’t understand what was going on. That was when I went and saw what the poster looked like.”

Doucouré said she received death threats when the poster was released, the Los Angeles Times reported.

“I received numerous attacks on my character from people who had not seen the film, who thought I was actually making a film that was apologetic about hypersexualization of children,” she said.

The director said she hoped “Cuties” would “make a big change in this world that hypersexualizes children” and the Netflix posters were “not representative of the film and especially its message.”

“I really put my heart into this film,” Doucouré told Deadline. “It’s actually my personal story as well as the story of many children who have to navigate between a liberal Western culture and a conservative culture at home.”

“Hopefully they will understand that we’re actually on the same side of this battle,” she said of critics ahead of the film’s release.