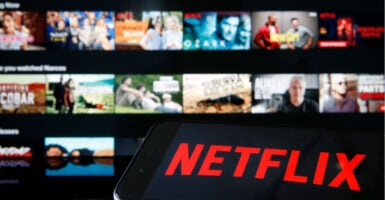 Variety reported of the new Netflix movie "Cuties" that "the conflicted protagonist, Amy, and the Cuties perform dance routines in which they simulate sex, and in the scenes the camera shots focus on their crotch areas." (Photo illustration: Chesnot/Getty Images)

So apparently it’s now a partisan value to be against pedophilia?

I was all for opposition to “Cuties,” a film that curiously thinks the best way to argue against sexualization of children is to … sexualize children. I saw it as a matter that united left, right, and center.

But apparently that’s too much to ask for in 2020.

Three years after the earthquake of the #MeToo movement, where Hollywood supposedly learned some lessons about consent and treating women well, the huge streaming service Netflix is vigorously defending “Cuties,” a movie that shows its female child actresses being sexually provocative.

To my surprise, the left seems to be gearing up either to defend Netflix, which recently added the French film to its library, or be quiet.

“The Creepy Conservative Obsession With Netflix’s Cuties, Explained,” sneered a Slate headline. (The writer, Sam Adams, helpfully went on to explain that if someone has good intentions, they can’t make pornography, which seems … not true?)

News site Axios bafflingly tied opposition to “Cuties” to a conspiracy theory, tweeting: “GOP politicians are jumpstarting a Netflix boycott in response to the film ‘Cuties,’ which denounces the hyper-sexualization of young girls on social media. Their stance is linked to a child sex trafficking conspiracy theory central to the QAnon movement.” (To its credit, Axios ultimately deleted the tweet and modified the news article to remove the baseless QAnon connection.)

And while conservative lawmakers, including Sens. Ted Cruz, Mike Lee, Josh Hawley, and Tom Cotton, have spoken out against the movie, an eerie silence emanates from liberal lawmakers.

House Speaker Nancy Pelosi’s daughter, Christine Pelosi, tweeted, “Hi @netflix, from a customer and former ADA in SFDA’a Child Abuse-Sexual Assault Unit: “Cuties” hypersexualizes girls my daughter’s age no doubt to the delight of pedophiles like the ones I prosecuted. Cancel this, apologize, work with experts to heal your harm. #CancelNetflix.”

But the House speaker herself has been silent on the matter. The Obamas, who have a reported multimillion-dollar deal with Netflix, also have been silent.

Apparently, the era of “silence is violence” is over, at least when it comes to saving our children from sexual exploitation.

But no! exclaim the liberal Twitterati—you’re just being simple Puritans. Can’t you see the sophistication of this movie, and how it really illuminates the evil of exploiting children?

And frankly, satire site The Babylon Bee has had the best response to this argument:

Or as the National Center on Sexual Exploitation’s Lina Nealon put it in a statement: “While we commend director Maïmouna Doucouré for exposing the very real threats to young girls having unfettered access to social media and the internet, we cannot condone the hypersexualization and exploitation of the young actresses themselves in order to make her point.”

So no, I haven’t seen “Cuties.” I haven’t even seen the trailer. In almost every previous such instance in my journalism career, I’ve strived to see something for myself before judging it.

But this is where I draw the line.

Just read the description of the movie from Variety, hardly an outlet belonging to the vast right-wing conspiracy:

In the film, the conflicted protagonist, Amy, and the Cuties perform dance routines in which they simulate sex, and in the scenes the camera shots focus on their crotch areas. It also portrays preteen characters in other sexual situations. For example, in one scene, Amy takes a picture of her genitals and then posts the photo on social media (although no explicit images are shown); earlier in the same scene, she makes a sexual come-on to her adult cousin to avoid getting punished for stealing his phone.

You know what? I’d like to go to my grave without ever seeing a child simulate sex.

And this is where it becomes clear Hollywood isn’t at all serious about #MeToo. On the Instagram account that appears to belong to the main actress of “Cuties,” Fathia Youssouf, it says she is 14 years old.

In an interview with Zora, which describes itself as a publication for women of color, the director herself refers to Youssouf and the other young actresses as children, saying, “I created a climate of trust between the children and myself.”

You know what children can’t do? Consent.

Before #MeToo careened off a cliff and became a politicized obsession with destroying the beer-swilling, possibly conservative Brett Kavanaugh, it was ostensibly a movement about recognizing that too often, women are pressured into sexual situations—particularly in Hollywood, which seemed to have missed the memo that women are people, too.

Of course, I had concerns about #MeToo: Due process remains vitally important, and idiotic mantras like “believe all women” help no one, including women. And I do not believe our legal system can—or should—attempt to punish people for all immoral actions.

But that doesn’t mean #MeToo was all wrong.

The scores of stories and anecdotes that poured out showed something was gravely wrong with our current sexual culture. A short story in The New Yorker, “Cat Person,” went viral after depicting a heroine who had unwanted sex simply because she didn’t want to come off as spoiled.

An unnamed women’s account of a horrible date with comedian Aziz Ansari (and his clumsy attempts to get sexual intimacy with her) similarly went viral. This spurred a debate about what was normal date behavior from a man and what was too far, as well as discussion about why women seemed so nervous to stand up for themselves and push back against unwanted sexual advances.

For a brief, shining moment, it looked like we might be realizing that the current sexual climate—fueled by alcohol and glib about the effect on the human psyche of hookups with strangers—was perhaps not the optimal way to live.

But it was not to be.

And so now, supposedly years after we all learned how vital consent is and how consent cannot necessarily be given when there is an imbalance of power, we’re finding Hollywood defending a movie that required underage actresses to simulate sex.

Even if Netflix does the right thing and cancels “Cuties,” the images of these girls being sexual will remain in dark corners of the internet—for all their lives.

Citing data from YipitData, Variety reported that Netflix cancellations were nearly eight times higher than usual on Saturday, when “#cancelNetflix” was trending on Twitter.

Good. Because if Netflix won’t do the right thing and end sexual exploitation of children because of public outcry, maybe it will if its bottom line gets hurt enough.

The left likes to talk a good game about being on the right side of history. But right now, as the left stays quiet about “Cuties,” it’s become clear that we will have conservatives to thank, not liberals, if sexual exploitation of children does not become the new normal of Hollywood.