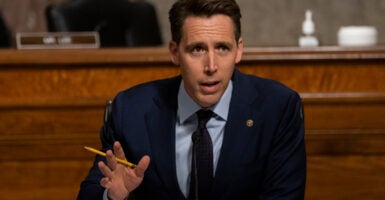 Sen. Josh Hawley, R-Mo., demanded Friday that Netflix remove the film “Cuties” after the company defended it the night before in a statement to The Daily Caller News Foundation.

“In early 2019, journalists first began to report that YouTube videos of children in partial states of exposure were being ‘inundated with comments’ by pedophiles, exposing the children involved in the videos and other children visiting the platform to potential harm,” Hawley writes in a letter to Netflix released Friday afternoon.

“Now Netflix is airing a film called ‘Cuties’ depicting children being coached to engage in simulated sexual acts, for cameras both onscreen and off,” he continues in the letter.

“Cuties is a social commentary against the sexualization of young children,” a Netflix spokeswoman said. “It’s an award-winning film and a powerful story about the pressure young girls face on social media and from society more generally growing up–and we’d encourage anyone who cares about these important issues to watch the movie.”

Why did your company designate this film with a ‘TV-MA’ for ‘language’ without any mention of its graphic sexual content? In marketing this film, did Netflix consult with any experts or authorities on combating child sexual exploitation or the psychological and emotional impacts of the sexualization of minors?

In marketing this film, did Netflix consult with any law enforcement authorities or experts about the possibility of copycat behavior, such as the viewing and imitation of hardcore pornography, by children who may see this film?

In his letter, Hawley also asks whether Netflix took measures to protect the “physical, mental, and emotional health of child actors made to perform simulated sex acts and filmed in sexual or sexually suggestive ways,” and whether Netflix chose to market the film “with a poster solely depicting scantily clad preteens in sexually suggestive positions.”

Why did your company choose to market this film with a poster different from the French original, which depicts children throwing confetti in the street. What internal algorithmic designations has Netflix appended to this film, and what are the primary algorithmic characteristics of the film’s primary viewership as of today, September 11, 2020?