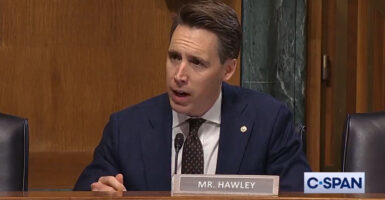 Sen. Josh Hawley, R-Mo., sharply questioned Attorney General Merrick Garland’s deployment of the FBI to intervene in local school board matters in an exchange Tuesday with one of Garland’s deputies during a Senate Judiciary Committee hearing.

In a memo the day before, Garland instructed the Justice Department and FBI “to address the rise in criminal conduct directed toward school personnel,” in what Hawley and other critics view as an attempt to silence parents who actively oppose their school districts’ adoption of critical race theory and other leftist ideas or policies.

“Is waiting to express one’s view at a school board meeting harassment and intimidation?” Hawley asked Deputy Attorney General Lisa Monaco at one point.

For Monaco’s reply and Hawley’s demand that Garland answer questions before the committee, view the video or read the transcript below.

Exchange between Sen. Josh Hawley and Deputy Attorney General Lisa Monaco on the attorney general’s recent memo to address threats against school board officials and educators as the debate over critical race theory and mask mandates continue at the local level. pic.twitter.com/PXeMtPkKgX

Sen. Josh Hawley: Ms. Monaco, I want to come back to this extraordinary letter and memorandum that the attorney general of the United States issued yesterday.

Practically every day brings new reports about this administration weaponizing the federal bureaucracy to go after political opponents. Frankly, I don’t think we’ve ever seen anything like it in American history. I mean, for those of us who missed the McCarthy era, I guess this president is intent on bringing it to us, but with new force and new power and new urgency unlike anything we’ve ever seen.

Deputy Attorney General Lisa Monaco: I’m not aware and I’m not aware that that—and that is not going on. Let me be very, very clear.

Hawley: Really? This isn’t about local school board meetings? That’s not the subject of the memorandum? I thought that was in the memorandum.

Monaco: The memorandum is quite clear. It’s one page and it asks the U.S. attorney community and the FBI special agents in charge to convene state and local law enforcement partners to ensure that there’s an open line of communication to address threats, to address violence. And that’s the appropriate role of the Department of Justice, to make sure that we are addressing criminal conduct and violence.

Monaco: As the attorney general’s memorandum made quite clear, spirited debate is welcome, is a hallmark of this country. It’s something we all should engage in and be free to engage in.

Hawley: No, I don’t think so, Ms. Monaco. With all due respect, it didn’t make it quite clear. It doesn’t define those terms, nor does it define harassment or intimidation. It talks about violence. I think we can agree that violence shouldn’t be condoned or looked aside from in any way, swept under the rug at all. But harassment and intimidation, what did those terms mean in the context of a local school board meeting?

In the First Amendment context, we talk about the chill, the chill to speech. If this isn’t a deliberate attempt to chill parents from showing up at school board meetings for their elected school boards, I don’t know what is. I’m not aware of anything like this in American history. We’re talking about the FBI. You’re using the FBI to intervene in school board meetings. That’s extraordinary.

Monaco: Senator, I have to respectfully disagree. That is not what—

Hawley: Point me to an instance.

Monaco: The attorney general’s memorandum made quite clear that violence is not appropriate. Spirited public debate on a whole range of issues is absolutely what this country is all about.

Hawley: Then why is it being investigated by the FBI?

Monaco: It is not. When and if any situation turns to violence, then that is the appropriate role of law enforcement to address it.

Hawley: The memorandum covers more than violence. It talks about intimidation, it talks about harassment, so I’m asking you to draw some lines. We do this all the time in the First Amendment context. This is the sum and substance of First Amendment law, so I expect that you’ll be available and willing to do it now. Tell me where the line is with parents expressing their concerns, waiting for hours in these school board meetings.

We’ve all seen the videos. This has happened in my state. Parents have waited for hours. Sometimes the school board meetings have been ended before they speak because the school board doesn’t want to hear it. And now, parents are told that if they wait and they express their views, that they may be investigated for intimidation?

Hawley: All I can say is this is truly extraordinary. I think you know it is. It’s unprecedented. You can’t point to a single instance where anything like this has happened before.

This is wrong, this is dangerous, and I cannot believe that an attorney general of the United States is engaging in this kind of conduct. And frankly, I can’t believe that you are sitting here today defending it.

Mr. Chairman, we need to have a hearing on this subject. We need to hear from the attorney general himself. He needs to come here, take the oath, sit there, and answer questions. We have never seen anything like this before in our country’s history and frankly, I want to say, I think it is a dangerous, dangerous precedent.