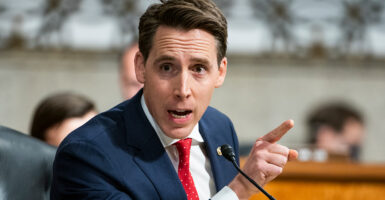 Sen. Josh Hawley, R-Mo., urged Attorney General William Barr on Thursday to launch a civil rights investigation into the St. Louis Circuit Attorney’s Office that is “threatening to prosecute” a couple that defended their home with firearms.

In a letter to Barr, Hawley wrote that Circuit Attorney Kim Gardner’s decision to investigate lawyers Mark and Patricia McCloskey was an “unacceptable abuse of power and [a] threat to the Second Amendment.”

The McCloskeys were investigated after confronting protesters with firearms, Gardner’s office said in a statement. Protesters broke down the gate to the McCloskeys’ home and marched the driveway in St. Louis, Missouri, on June 28, according to video of the incident.

Gardner’s office is “threatening to prosecute not the trespassers, but the McCloskeys” and permitted police to seize the McCloskeys’ firearms, Hawley wrote, citing a KMOV4 article. The police have filed for warrants, but no charges have been filed against the McCloskeys, KMOV4 reported Thursday.

“Her office has seized their firearms, and police have applied for warrants in the case, with an indictment believed to be imminent,” Hawley wrote.

“This morning I have asked the Department of Justice to open a civil rights investigation into the St Louis Circuit Attorneys Office,” Hawley said on Twitter Thursday.

This morning I have asked the Department of Justice to open a civil rights investigation into the St Louis Circuit Attorneys Office. Targeting law abiding citizens who exercise constitutionally protected rights for investigation & prosecution is an abuse of power https://t.co/lg9GbisWgd

Hawley said Gardner and the St. Louis Circuit Attorney’s Office are following a “politically-motivated pattern” in prosecuting the McCloskeys while refusing to prosecute violent protesters who were arrested, according to press release from Hawley’s office. Hawley said the McCloskeys were within their Second Amendment rights to protect their home.

“There is no question under Missouri law that the McCloskeys had the right to own and use their firearms to protect themselves from threatened violence, and that any criminal prosecution for these actions is legally unsound,” Hawley wrote.

Gardner told The Daily Caller News Foundation in an email that she was “deeply disappointed that a U.S. Senator would intervene in a local matter that is under investigation.”

The St. Louis Circuit Attorney’s Office tweeted Thursday that it “will not be bullied by a sitting U.S. Senator or anyone else” and will continue the investigation.

Baseless. Our office will continue to investigate this matter, and will not be bullied by a sitting U.S. Senator or anyone else. https://t.co/IWhHD8RaxG

Hawley did not respond immediately to The Daily Caller News Foundation for comment.