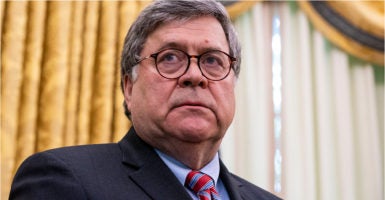 Many outlets “drove” some of the “sensational” allegations of collusion between the Trump campaign and Russian government, Attorney General William Barr says. Pictured: Barr listens as President Donald Trump speaks in the Oval Office before signing an executive order related to regulating social media May 28, 2020, in Washington, D.C. (Photo: Doug Mills-Pool/Getty Images)

Attorney General William Barr said he is “very troubled” by revelations from an investigation that U.S. Attorney John Durham is conducting into the origins of the Trump-Russia probe.

Many outlets “drove” some of the “sensational” allegations of collusion between the Trump campaign and Russian government, Barr said in the interview Tuesday with Fox News.

Barr’s interview was largely an update of Durham’s probe, which began as an examination of the FBI’s “Crossfire Hurricane” investigation. It has since expanded into a criminal inquiry.

The goal of Durham’s investigation is to bring charges for any criminal wrongdoing, but he expects there to be “public disclosure” in the form of a report, Barr said.

Barr declined to say whether he has seen evidence of criminal wrongdoing, but he said he is “very troubled by what has been called to my attention so far.”

“The Durham team has been working very aggressively to move forward, and as I’ve also said, this isn’t being driven by producing the report. We are trying to get to a point where we can hold accountable anyone who crossed the line and committed a criminal violation.”

Barr said he is concerned that the FBI continued its investigation of the Trump campaign—which started in July 2016—even after discovering that “there wasn’t really much there” regarding coordination between the Trump campaign and the Kremlin.

“It’s very hard to understand why they continued to push and even make public in testimony that they had an investigation going when it was becoming painfully obvious, or should have been obvious to anyone, that there was nothing there,” Barr said.

Barr reiterated his previous comments that he does not expect that former President Barack Obama or former Vice President Joe Biden will be implicated in the investigation, but he said that “some” of those targeted in the probe are names that are familiar to the American public.

“For the first time in American history, police organizations or national security organizations were used for spying on a campaign,” he said.

He took a swipe at the media, saying that news outlets “largely drove … all kinds of sensational claims.”