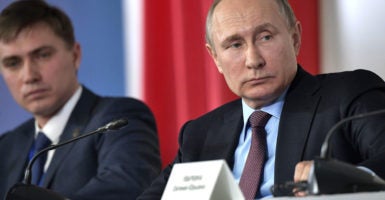 Russia directed cyberattacks against U.S. political institutions in 2015 and 2016, but there is “no evidence of collusion, coordination, or conspiracy between the Trump campaign and the Russians,” the House intelligence committee has concluded.

Findings and recommendations can improve “security and integrity” in midterm elections, @DevinNunes says.

For the past 14 months, the House Permanent Select Committee on Intelligence has probed allegations that the government of Russia President Vladimir Putin meddled in the 2016 elections.

The House committee explored possible links between the Russians and the campaigns of the two major presidential candidates, Donald Trump and Hillary Clinton.

The probes by the House panel and its Senate counterpart have been overshadowed by special counsel Robert Mueller’s ongoing investigation of Russian interference in the election, and alleged “collusion” between Moscow and the Trump campaign.

The draft report, exceeding 500 pages and including over 600 citations, was delivered Tuesday to committee Democrats for review and comment.

Once adopted, the report will be the subject of a declassification review before it is made public.

The report discusses Russian cyberattacks on American political institutions and “their use of social media to sow discord,” as well as “a pattern of Russian attacks on America’s European allies.”

It identifies “a lackluster pre-election response” by the Obama administration to “Russian active measures.”

In addition to dismissing allegations that the Trump campaign colluded with Moscow, the committee report examines “how anti-Trump research made its way from Russian sources to the Clinton campaign” and what it describes as “problematic contacts” between certain intelligence officials and the media.

Although committee members generally agreed with the U.S. intelligence community’s assessment released in January, they took exception to the idea that Putin had a preference for Trump over Clinton in the presidential campaign.

The Office of the Director of National Intelligence responded to the intelligence committee’s report with a statement defending the assessment.

“The Intelligence Community stands by its January 2017 assessment, ‘Assessing Russian Activities and Intentions in Recent US Elections,’” spokesman Brian P. Hale said, adding that the office would review the findings of the committee report.

Speaking on behalf of the intelligence committee, Nunes said lawmakers hope officials will use the findings and recommendations of the final report to improve “security and integrity for the 2018 midterm elections.”

Rep. Adam Schiff, D-Calif., ranking member on the committee, issued a statement claiming Nunes and the panel’s Republican majority were more interested in protecting Trump than in protecting the interests of the country.

Policy recommendations in the report include support for America’s European allies, an American response to Russian cyberattacks, transparency in campaign finance, and counterintelligence practices focused on political campaigns.