Why Didn’t the FBI Record the Flynn Interview? 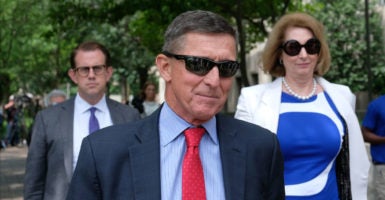 Whether former national security adviser Michael Flynn, pictured in 2019, lied in his interview has become a bone of contention between supporters and critics. (Photo: Alex Wroblewski/Getty Images)

There are so many angles to the FBI-Michael Flynn imbroglio, and most have been covered in great depth across a divergent set of viewpoints. But one aspect that has not been covered, and that opens up a wider lens into FBI policy, is the fact that the FBI refuses to audiotape, much less videotape, interviews of witnesses or suspects such as Flynn.

That policy is counterproductive and makes no sense in 2020. The FBI needs to take itself out of the J. Edgar Hoover era and align itself with modern law enforcement best practices.

Whether Flynn lied in his interview has become a bone of contention between supporters and critics. It doesn’t matter to the motion to dismiss the charges against Flynn that was filed by the Justice Department because even if he did lie, the department says it cannot “explain, much less prove to a jury beyond a reasonable doubt, how false statements are material to an investigation” that the government had no basis to conduct because it had no evidence Flynn had broken the law.

In other words, the FBI had no valid reason to interview Flynn about his conversation, as the incoming national security adviser for President Donald Trump, with former Russian ambassador to the U.S. Sergey Kislyak.

Therefore, nothing Flynn said in the interview was “material,” a necessary element of being charged with lying to a government agent. In fact, as the Justice Department says, the interview “seems to have been undertaken only to elicit [Flynn’s] false statement and thereby criminalize Mr. Flynn.”

But did Flynn actually lie to the FBI agents who interviewed him about his conversation with the Russian ambassador?

But we have neither.

The U.S. government routinely surveils foreign ambassadors like Kislyak, and it has a recording of Kislyak’s conversation with Flynn. But that recording has not been publicly released.

But even if it were released, we still would not be able to determine whether Flynn lied to the FBI when he was interviewed because the FBI refuses to record its interviews.

Instead, after they interview a suspect, FBI agents write out a summary of the conversation in what are known as “302s,” so named after the number on the government form they use.

So the government’s only record of its interview with Flynn is the 302, in which FBI agents summarize what was supposedly said, as well as their subjective impressions and memory.

The 302 on the Flynn interview has not been exposed, but it has been widely reported that the interviewing agents told their supervisors they didn’t think Flynn lied to them. In fact, the Flynn 302 wasn’t completed until three weeks after the interview and went through “major revisions and edits.”

As such, it is hearsay with edits from people who weren’t even at the interview.

That raises the question: Why doesn’t the FBI videotape, or at least audiotape, its interviews with witnesses and suspects? Smartphones are ubiquitous, and law enforcement agencies elsewhere seem to videotape everything.

Meanwhile, as the nation’s chief federal law enforcement agency, the FBI employs professionals in cyber, national security, computers, and linguistics, as well as analysts and all sorts of scientists, counterterrorism experts, and more. Many are the best in their fields, yet they are not widely known.

Special agents are the outward face of the bureau, the police force of the FBI. They work in the field; investigate and build cases; work with local, state, and other federal counterparts to fulfill their mission; and are responsible for interviewing witnesses and suspects.

The FBI does record forensic interviews of child victims and witnesses, but not adult witnesses or suspects. The FBI has explored recording interviews of adults, and it’s aware that other law enforcement agencies have done so for some time.

In 2014, then-Attorney General Eric Holder announced a new policy that interviews of federally detained persons would be electronically recorded. But the announcement only “created a presumption” of a new shift and applied only to “individuals in federal custody following arrest but prior to their first appearance in court.”

The policy was supposed to “ensure accountability and promote public confidence” in the FBI, but it didn’t accomplish that and is not in practice today.

The FBI resists videotaped and audiotaped recordings for several reasons, all of which lack merit.

They suggest that if the FBI taped interviews, criminals would learn about their interrogation techniques, which would help criminals being interrogated. But the techniques they lawfully use, including lying to suspects, are well-known.

Furthermore, when confronted with facts (or what the suspect is told are the facts), many suspects waive their Miranda rights and voluntarily speak to the police.

Even if someone were to analyze years of FBI interrogation videotapes, it’s not as though they would then create an online course called “How to Beat the FBI’s Interrogation Techniques.”

The benefits of videotaping suspect interviews far outweigh the minor costs of doing so. Those benefits not only flow to the government, but also to the defendant, his or her counsel, and the judge and jury who preside over the case if it goes to trial.

Videotaping suspect interviews shows everyone what happened from the moment the video is turned on. You can hear what was said, see the body language of the police officer and the suspect, and pick up cues from their tone, volume, and inflection. You don’t have to rely on the police report that summarizes a custodial interrogation—which is exactly what an FBI 302 form does.

Taping eliminates, beyond any doubt, whether the suspect invoked his right to remain silent or his right to an attorney at any point during the taped custodial interrogation.

Defendants sometimes claim they invoked those rights during the interrogation, but the police ignored their requests. Their defense attorneys typically file a motion to suppress the statement, which then requires the government to file a reply brief, and the judge to hold a pretrial hearing to rule on the motion.

A video or audiotape would short-circuit this process and prevent wasting the court’s time.

Furthermore, a videotaped interrogation gives the prosecutor an insight into the quality of the interrogation, the strength or weakness of the questioning, and the credibility of the defendant and his or her statement. That helps the government decide which cases have merit.

In jurisdictions that require videotaped custodial interrogations, the government is required to disclose the videotape to the defense attorney during the normal course of discovery. But even if it weren’t required, it still holds a number of benefits for all involved.

Defense attorneys can watch and listen to their clients while in police custody, which gives them an accurate portrayal of what happened during the interrogation.

They can see whether the police explained their client’s constitutional rights and whether their clients acknowledged as much by initialing a piece of paper and waived them. That cuts down on needless pretrial litigation.

In rare instances where a law enforcement officer ignores a suspect’s request to remain silent or for an attorney during a videotaped interrogation, it’s beneficial to have proof of that, too.

A prosecutor needs to know about violations of the accused’s constitutional rights. It may—and likely would—affect whether charges will be filed.

The prosecutor would, no doubt, inform the officer’s superior for disciplinary action, helping to deter future such actions. And if there is a prosecution, the government would not be able to use the accused’s statement in the government’s case in chief.

Judges and juries benefit from seeing videotaped interrogations and have come to expect it. If the accused says something on the videotape that implicates him in the crime, the government may well want to play the videotape for the jury. That’s far more compelling, and believable, than a police officer or FBI agent testifying about what the accused allegedly said to him.

In instances where an accused confesses to a crime on videotape, after knowingly and voluntarily waiving his or her rights on tape, the likelihood of a guilty plea goes up.

If the same confession happened without a videotape or audiotape, then it is less likely the accused will plead guilty, because the only proof of the confession is the police officer’s notes and memory.

Finally, recording interrogations helps build public confidence in law enforcement. We need professional, well-trained law enforcement officers to protect and defend us from criminals. Most do their jobs with extraordinary bravery and dedication to duty.

If the FBI changed its policy, and videotaped all custodial interrogations, the public would have more confidence in and respect for its work.

There is simply no legitimate reason today for the FBI to refuse to record witness interviews and interrogations in non-terrorism cases.

If it had done so in the Flynn case, at least one of the issues raised in the case would not be a matter of dispute today; namely, what FBI agents asked Flynn, and what he actually said, on Jan. 24, 2017.