Investigation of Trump-Russia Probe Looks at ‘Actors,’ Agencies Beyond FBI 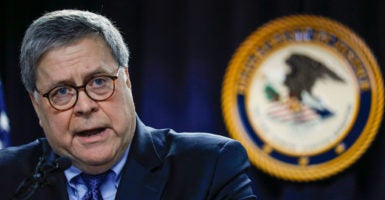 Attorney General William Barr provided new details of a federal prosecutor’s criminal investigation of the origins of the Trump-Russia probe in an interview on Fox News Channel, saying the prosecutor is looking into the activities of federal agencies outside the FBI as well as those of “private actors.”

“He’s not just looking at the FBI,” Barr said Wednesday of U.S. Attorney John Durham. “He’s looking at other agencies … and also private actors, so it’s a much broader investigation.”

The attorney general did not elaborate on which “private actors” are part of the Durham probe.

In May, Barr tapped Durham, the U.S. attorney in Connecticut, to investigate federal agencies’ surveillance and investigative activities related to the Trump campaign in 2016.

Durham’s probe has run parallel to a Justice Department inspector general’s investigation into the FBI’s surveillance of Carter Page, then a Trump campaign adviser.

Michael Horowitz, the inspector general, found extensive evidence of “significant inaccuracies” in the FBI’s applications for warrants under the Foreign Intelligence Surveillance Act to eavesdrop electronically on Page. The applications, which relied heavily on information from the unverified Steele dossier, asserted there was probable cause to suspect that Page was a Russian agent.

Horowitz found the FBI failed to disclose exculpatory information about Page and derogatory information about Christopher Steele, the former British spy who wrote the dossier. Steele worked in 2016 on behalf of Fusion GPS, an opposition research firm hired by the Clinton campaign and Democratic National Committee.

Horowitz’s report debunked one of the Steele dossier’s main allegations of Trump-Russia collusion: that former Trump private lawyer Michael Cohen visited Prague in August 2016 to meet with Kremlin operatives to discuss paying off hackers. The report said the allegation was “not true.”

The Horowitz report also said the FBI was unable to corroborate Steele’s allegations that Page was part of a “well-developed conspiracy of co-operation” involving the Trump campaign and Russia. Steele told the FBI in early October 2016 that he believed one of the main sources for the allegation was a “boaster” prone to embellishment.

In the interview with Fox’s Martha MacCallum, Barr said Durham is looking at issues beyond the FBI’s warrant applications under FISA.

“Also, he’s not just looking at the FISA aspect of it. He is looking at all the conduct both before and after the election,” Barr said.

Barr said that Durham likely won’t be done with his investigation into the origins of the Trump-Russia probe for “quite a few months.”

The attorney general said he has not given Durham a timeline to complete the probe, which is focused on the FBI and CIA’s investigation and intelligence-gathering related to Trump campaign associates in 2016. But Barr dismissed speculation that the probe will be over any time soon.

“Just based on my general knowledge of the things he’s looking at and has to look at in the future, I wouldn’t think that he’d be in a position for quite a few months,” Barr told MacCallum.

Since Barr tapped Durham to review the FBI and CIA’s activities, that review has morphed into a criminal investigation, meaning that Durham has the power to issue subpoenas and impanel a grand jury.

Durham is reportedly investigating the activities of Kevin Clinesmith, a former FBI lawyer who allegedly altered an email that the bureau used as part of its investigation into whether Page was a Russian agent.

Durham is reportedly interested in Brennan’s deliberations regarding the Steele dossier, as well as the assessment that Russia meddled in the 2016 election specifically to help Donald Trump win.

Barr told MacCallum that the FBI’s investigation after the election is “very questionable.”

“I think there has to be a lot of focus as to what happened after the campaign. And they learned that their whole case had collapsed and they really had no basis to take it further,” he said.