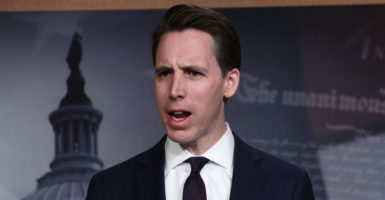 The proposal from Sen. Josh Hawley, R-Mo., would require universities to pay off 50% of the debt incurred by their students facing default. (Photo: Alex Wong/Getty Images)

Republican Sen. Josh Hawley of Missouri announced Tuesday he will introduce two pieces of legislation this week targeting institutions of higher education, one of which would put universities on the hook financially if students are unable to repay their student loans.

Americans hold nearly $1.5 trillion in outstanding student debt, 10.9% of which is over 90 days delinquent, according to the latest figures available by the New York Fed. Hawley’s proposal would require universities to pay off 50% of the debt incurred by their students facing default.

The Missouri senator’s proposal would also prohibit universities from increasing their tuition rates to offset their increased liability.

Fox News host Tucker Carlson explicitly called on Congress in March to pass a law forcing colleges to shoulder a portion of the liability on defaulted student loans.

“Colleges get all of the benefit and none of the risk,” Carlson, who is the co-founder of The Daily Caller News Foundation, said. “That’s the definition of a scam. It’s amazing it could even be legal. It shouldn’t be.”

“Maybe Congress could take 20 minutes from the Russia hoax and posturing about climate change and fix one of the biggest problems this country faces,” Carlson said. “Pass a law forcing colleges to share the liability on defaulted student loans.”

Hawley said his bill is “meant to address the concentration of power that has accumulated in the higher education space,” during an interview with The Hill on Tuesday. He noted that “many of them have built massive endowments that has been enabled by federal tax dollars.”

“It’s time to break up the higher education monopoly. It’s time to level the playing field and provide more options for career training. We also must hold higher education institutions accountable that take advantage of students who rack up mountains of debt, are unable to find a good job and default on their loans,” Hawley said in a press release Tuesday.

Most federal student loan programs do not require a credit check, nor is a cosigner required. Rather, the loans are divvied out to students backed by nothing but their future earnings with a college degree.

But the Department of Education loans billions to students who chose to pursue degrees in the liberal arts and humanities that are unlikely to give them the means to pay back their debt after graduating, a Daily Caller News Foundation analysis found.

Students who majored in the liberal arts and humanities have significantly higher rates of default than those who pursued business, vocational, and STEM majors, according to the New York Fed.

Upward of 29% of student borrowers will ultimately default on their loans, according to a 2018 Brookings Institution estimation.

“American students and workers need more pathways into the middle class, more opportunities to get good work and build bright futures. And they shouldn’t have to further enrich colleges by taking on a mountain of debt or mortgage their lives in order to get a good-paying job,” Hawley said Tuesday.