Josh Hawley Wants to Break Up the College Monopoly. Why His Approach Could Help. 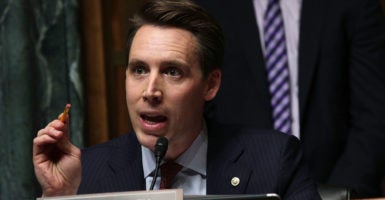 One bill would expand access to career and technical education by making career-focused education options—such as apprenticeships or certificate programs—eligible for Pell Grant funding.

The second would require colleges to pay 50% of the student loan balance for loans that enter default, giving colleges “skin in the game” and a powerful incentive to provide an education that translates well into the job market.

Colleges and universities are too expensive and often send off graduates with few marketable skills—if they graduate at all. Moreover, colleges have no incentive to step up their game because they have an open flow of cash coming from the federal government, students have few alternatives, and colleges bear little accountability for the quality of education they provide.

The best way to hold colleges accountable is to get the federal government out of the business of lending to students. Federal lending to students, though well-intentioned, has been the leading factor driving today’s out-of-control tuition costs.

But there are positive steps that can be taken short of full reform. Giving students other options and putting colleges on the hook for student loan defaults could be a step in the right direction.

Making trade schools more accessible and affordable through Pell Grant funding could be life-changing for many students.

For too long, the accreditation process has acted as a gatekeeper that keeps out new providers who offer students real skills for less money and less time, while protecting long-standing universities despite their poor track records of success.

Hawley’s proposal would create an entirely new pathway—outside of accreditation—for students who attend career-based programs to be able to use Pell Grants to offset the cost of school.

While some may argue that bypassing accreditation may allow poor-quality schools to receive taxpayer dollars, the senator’s proposal would likely prevent that, since it includes eligibility requirements that are arguably much stricter than those imposed by accreditors.

For example, to receive certification under this alternative pathway, a school must provide student outcome data such as job placement rate, graduate median starting salary, and program completion rate.

Additionally, a school could lose its certification if, for example, its job placement rate within 90 days of completing the program is less than 50%, or if the graduate median starting salary is less than 200% of the federal poverty level.

This would be a real advance from the current accreditation regime, which places relatively little emphasis on student outcomes data and focuses instead on how many books a school has in their library or how many faculty members hold Ph.D.s.

Although it is never ideal to put in place federally defined metrics, these relatively straightforward targets would provide needed transparency to the taxpayers who fund Pell Grants.

Hawley’s second proposal, titled the Skin in the Game Act, is short and to the point.

In fewer than 200 words, the bill proposes that colleges and universities participating in the federal student loan program be on the hook for 50% of the loan balances that enter into default. Additionally, colleges would be disallowed from raising their tuition to try to offset the new financial burden imposed by paying off defaults.

Student loan default rates are a growing problem. Nearly 40% of students are expected to default on their loans by 2023. If students find themselves without the proper training to compete in the job market after spending tens of thousands of dollars to get a bachelor’s degree, it’s safe to say that at some point, their university failed them.

Colleges, like all businesses, should be held responsible for the quality of their product. Requiring schools to pay off a percentage of a student’s debt if they enter default is one strategy to encourage schools to do better while protecting taxpayers and students.

It will be important to follow how this proposal ultimately treats tuition increases. Indeed, having the federal government set a rate at which schools must repay defaulted student loans, and preventing schools from raising tuition to offset that cost, could create distortive issues of its own.

However, the prohibition in the Hawley legislation seems to reflect “supplement not supplant” language that is standard in many federal programs. Such language states that a recipient of federal funds (a state or other entity) cannot supplant, or replace, state spending with the new federal spending, thus safeguarding against the recipient relying on federal aid.

The Skin in the Game Act appears to apply narrowly to schools that raise their tuition specifically in response to being liable for a portion of their students’ loan defaults.

“Skin in the Game” policies could provide needed protection for taxpayers. At the same time, conservatives should continue to keep the big picture in mind: Restoring the private loan market is what ultimately would drive tuition prices in a way that reflects the quality of schools, benefitting students and taxpayers alike.

Breaking up the higher education monopoly is key to solving our $1.6 trillion student debt crisis. Making Pell Grants more flexible and accessible to more schools would add much-needed competition into higher education and encourage colleges to step up their game.

For those colleges that continuously fail students, the Skin in the Game proposal could provide long-needed accountability—to the benefit of students and taxpayers.