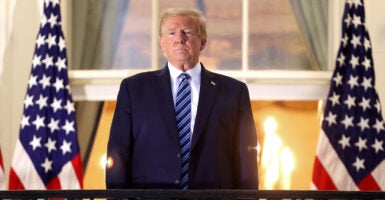 Comedian Chris Rock, hosting “Saturday Night Live,” summarized the feelings shared by much of President Donald Trump-hating America when he quipped, “President Trump is in the hospital from COVID and I just wanna say my heart goes out to COVID.” The audience then erupted in laughter.

Joe Biden aide Ron Klain, who served Biden in the White House during the Obama administration, candidly admitted no. At a 2019 forum at the National Press Club, Klain said:

I was in the White House in 2009 and 2010. I was working for Vice President Biden. I wasn’t involved directly in the H1N1 response, but I lived through it as a White House staffer, and what I would say about it is: A bunch of really talented, really great people were working on it, and we did every possible thing wrong. And 60 million Americans got H1N1 in that period of time, and it’s just purely a fortuity that this isn’t one of the great mass casualty events in American history. It had nothing to do with us doing anything right. It just had to do with luck.

Trump’s enemies are accusing him of purposefully mismanaging the coronavirus pandemic. But this is par for the course in the Trump era.

After all, about 29% of the Democratic congressional delegation boycotted Trump’s inauguration; several never attended any of the president’s State of the Union speeches; Democrats attempted to invoke the 25th Amendment by arguing that the new president was mentally unfit for the job; Rep. Alexandria Ocasio-Cortez, D-N.Y., accused him of violating the Emoluments Clause; there was a two and a half-year Russia-Trump collusion investigation; Trump was impeached; and somehow, The New York Times acquired several years of his income tax returns, apparently revealing that Trump paid little or nothing in federal income taxes for many years.

And Trump has routinely been compared to Josef Stalin, Adolf Hitler, a dictator, a tyrant, a grifter, and other things unsuitable for family consumption. As to Trump’s handling of the coronavirus, Democrats, like Democratic presidential rival Joe Biden, literally accuse Trump of all but personally murdering more than 200,000 people.

Goodness, does this make Dr. Anthony Fauci a co-conspirator? In a “60 Minutes” episode that aired on March 8, Fauci expressed skepticism about the effectiveness of wearing masks:

There’s no reason to be walking around with a mask. When you’re in the middle of an outbreak, wearing a mask might make people feel a little bit better, and it might even block a droplet, but it’s not providing the perfect protection that people think that it is. And, often, there are unintended consequences: People keep fiddling with the mask, and they keep touching their face.

Is Biden a co-conspirator in this mass homicide for criticizing Trump, who, at the end of January, announced travel restrictions on aliens who had been in China in the preceding 14 days, preventing their entry into the U.S.? The next day Biden tweeted:

We are in the midst of a crisis with the coronavirus. We need to lead the way with science—not Donald Trump’s record of hysteria, xenophobia, and fear-mongering. He is the worst possible person to lead our country through a global health emergency.

Let us not forget that China lied to the world about when it first learned of the coronavirus and lied when it denied that there was human-to-human transmission of the deadly virus. As a result of those lies, the rest of the world played catch-up from the very beginning.

Furthermore, according to a recent study by the University of California, Los Angeles, the virus may have been in America months sooner than initially thought. Therefore, we may be underestimating the number of Americans who have already contracted the virus.

UCLA Health writes: “UCLA researchers and colleagues who analyzed electronic health records found that there was a significant increase in patients with coughs and acute respiratory failure at UCLA Health hospitals and clinics beginning in late December 2019, suggesting that COVID-19 may have been circulating in the area months before the first definitive cases in the U.S. were identified.”

Expert medical advice continues to evolve during the course of this pandemic. Trump, as he told The Washington Post’s Bob Woodward, wanted to project an image of calm.

Trump also recognized that dealing with this crisis, like most things in life, requires trade-offs. Shutting down the economy has unintended costs, including but not limited to divorce, alcoholism, drug addiction, and domestic violence. Not an easy call for Trump to make.

In the meantime, can even Trump-haters pray for his full recovery? Or, at least, pretend to?