A Bigger Government Wouldn’t Have Prevented Coronavirus. It Would Have Made Things Worse. 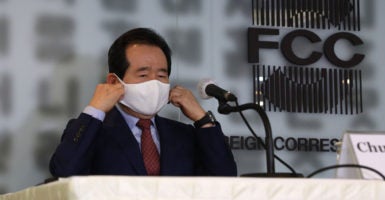 What South Korea unequivocally did better than the U.S. is test its own citizens. Pictured: South Korean Prime Minister Chung Sye-kyun removes a mask before holding a press conference on COVID-19 Friday at the Seoul Foreign Correspondents' Club. (Photo: Chung Sung-Jun/Getty Images)

Liberal news and politics outlets are exploiting the coronavirus pandemic to lobby for their pet big-government proposals.

Whether Sen. Bernie Sanders’ “Medicare for All” proposals, laudatory essays on authoritarian China’s response to the crisis, or appeals for new federal agencies and debt-financed universal basic income policies, “big government” as a term and potential savior in this health crisis has become fashionable again.

Let’s not kid ourselves: A bigger government, at least one that maintains its outdated and creaky bureaucracies, never was going to stop this virus.  Rather, it was going to increase the danger.

Would a bigger Centers for Disease Control and Prevention with more expansive powers have helped in the case of the new coronavirus that causes COVID-19? Likely not.

In fact, the budget of the CDC’s Global Health unit, which is on the lookout for pandemics, increased from $494 million in fiscal year 2019 to $570 million in fiscal 2020, reflecting a steady increase in the unit’s budgetary authority since the CDC’s inception. The CDC’s total budget is more than 7% larger than it was under President Barack Obama in fiscal 2016 and 2017.

Yet that didn’t suddenly make the Centers for Disease Control and Prevention agile and effective, as our current public health crisis shows.

We cannot make the mistake of assuming that more money will make an organization more efficient; oftentimes, it can have the opposite effect. Just ask our public school system.

Then there are those who say that China’s “authoritarian” clampdown measures and South Korea’s “near-authoritarian” measures helped prevent COVID-19 from widely spreading, a wildly misleading claim that exaggerates the efficacy of authoritarian responses to the pandemic.

First, China’s authoritarian government obfuscated and denied the magnitude of the crisis.

These are features, not accidents, of authoritarian systems.

A study from England’s University of Southampton by emerging disease researchers Shengjie Lai and Andrew Tatem shows that if China had acted a mere week earlier, it could have prevented 67% of the COVID-19 cases there. If anything, China’s authoritarian sensibilities hindered decisive and important action on the coronavirus.

As for South Korea’s much-lauded response, one to which the U.S. often is unfavorably compared, the first thing that needs to be said is that narratives change quickly.

Just two weeks ago, The New Yorker ran an article under the headline “How South Korea Lost Control of Its Coronavirus Outbreak,” criticizing the government for hesitancy and reticence in tackling the disease.

Now South Korea is being hailed as a model state. Even good responses to crises may be panned initially, and that logic may apply to the United States in a few weeks too.

What South Korea unequivocally has done better than the U.S., however, is test its own citizens. At one early point, South Korea did 20,000 tests per day, enabling the government to act quickly on virus hot spots. How come?

It’s not because of the size and intimidation of the South Korean government. Rather, it’s because the government coordinated an effective public response, armed with public buy-in.

A nasty outbreak of MERS (Middle East respiratory syndrome, caused by another coronavirus) threatened public health in 2015. In response, South Korea passed legislation allowing the government to collect mass data on patients and hospitals in emergencies, spurring effective testing in response to this year’s outbreak of the new coronavirus.

With this law, the South Korean government was able to warn the public about those who were potentially infected, as well as the infected themselves, allowing citizens to practice a more targeted form of social distancing.

Although this law could be interpreted as a breach of civil liberties, it enabled South Korea to take a more lenient approach rather than a draconian approach such as curfews and travel bans that China and Italy have had to endure.

In contrast, South Korea neither imposed travel bans nor heavily restricted movement by the populace to curb its COVID-19 cases. It was able to reduce cases while maintaining openness and transparency, with significant public trust.

What’s the lesson here? It is not that a bigger government would deliver a better response, but that a more efficient and transparent government would be able to stave off the worst of pandemics such as the coronavirus.

The U.S. response blends a federal and a civil society approach that is unique and hasn’t been tried before.

The federalism is apparent as the Trump administration yields authority to state governors to manage the crisis. The civil society approach is revealed in stern recommendations to self-quarantine and practice social distancing.

We have yet to find out just how effective this combination of strategies will prove to be. But more localized, targeted approaches were effective in South Korea, and the involvement of the citizenry—as opposed to iron-fisted police crackdowns—is essential in fighting the spread of pandemics.

Both strategies are inimical to a big-government response that places all responsibility on centralized authority and police power.

When the dust settles, Americans inevitably will consider proposals to restructure our government based on their experiences with the coronavirus. When that debate comes, we as a country must not give into fear and desire for a false sense of security.

We must seek to make our government leaner, more efficient, and more transparent. As we have seen, those terms are not synonymous with “big,” but are likelier opposites.