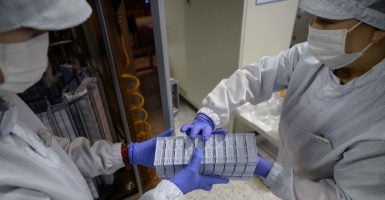 Early international media reporting on the outbreak of the COVID-19 coronavirus in South Korea was both alarming and alarmist.

News coverage emphasized that, outside of China, South Korea had the highest number of coronavirus cases, which led 170 other countries to impose travel entry bans on South Koreans.

But, after new cases peaked in late February, the number of sick people is now decreasing and the number of recovered patients is rising.

There’s now an outpouring of acclaim for South Korea’s strategy, which enabled it to be one of the few countries to “flatten the curve” of new cases.

Seoul was able to accomplish it without imposing China’s draconian social measures or declaring widespread quarantines, travel bans, or business closures, as in other countries.

But while South Korea’s testing program has become the global gold standard, it comes at a potential cost in civil liberties that other nations may not seek (or be able) to emulate.

Shortly after the initial discovery of the virus, South Korea implemented a “TRUST” strategy—an acronym for “Transparency, Robust screening and quarantine, Unique but universally applicable testing, Strict control, and Treatment.”

The first cases of COVID-19 in South Korea and the U.S. were both detected on Jan. 20, but Seoul responded more quickly.

Just one week after the country’s first case was diagnosed, South Korean officials met with representatives from 20 medical companies to request they immediately develop COVID-19 test kits for mass production.

One week after that meeting, South Korea’s equivalent of the Centers for Disease Control and Prevention began approving companies’ diagnostic tests with others soon following. Within two weeks, South Korea was producing 100,000 kits per day.

Early in the pandemic, South Korea was testing 10,000 to 20,000 people per day at a time when the U.S. had not reached that level cumulatively. South Korea created 600 testing sites, including drive-thru test centers, where people didn’t need to leave their cars and got results within hours.

Seoul immediately began the testing of asymptomatic people, rather than restricting testing to those with severe conditions or a history of contact with affected regions or people, as in the United States.

South Korea isolated and treated patients with mild or even no symptoms, which constrained further spread and minimized the impact on hospitals.

On March 20, the U.S. Food and Drug Administration authorized a new test that could detect the coronavirus in about 45 minutes with test kits to begin shipping by the end of the month. South Korea already has a 10-minute test kit and plans to export 300,000 kits per week.

South Korea has the highest proportion of cashless transactions in the world and one of the world’s highest rates of cellphone ownership, along with millions of security cameras.

During dangerous epidemics, authorities have warrantless access to the private data.

Once someone is confirmed with COVID-19, the government can retrace their movements and alert, notify, and if necessary, quarantine others who may have come into contact with them. Quarantined people are required to download a monitoring app that alerts authorities if they break isolation.

As South Koreans move about the country, they receive new geographically linked alerts about those who have been infected.

The granularity of the information is impressive, if not intimidating. An individual’s movements, purchases, and images can be minutely detailed, including whether they were wearing a mask or not at a given time.

South Korea should be commended for implementing a quick and effective response that curtailed the spread of COVID-19. Even before there were many cases in the country, President Moon Jae-in’s administration brought together government agencies, reached out to the private sector, and took bold action.

That effort was in contrast to the slower pace and less urgent warnings of the U.S. government. Because of the slow and limited nature of COVID-19 testing in the United States, the extent of the virus and the number of infected citizens was not well understood.

Washington was also hampered by cumbersome rules which—unlike in South Korea—constrained the private sector from responding to the need for tests.

The Centers for Disease Control and Prevention took the lead in creating test kits, but initially produced faulty systems with lengthy vetting procedures.

The CDC also insisted on narrow criteria for testing individuals, focusing on those with strong symptoms with recent travel to China, rather than the less restrictive protocol in South Korea, which enabled detecting infected people with few or no symptoms.

Finally, the South Korean government’s warrantless access to personal data enabled effective epidemic response, but with a Big Brother invasiveness that would be anathema to American standards of personal privacy.