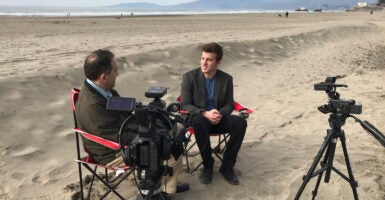 In a scene from the documentary "Climate Hustle 2," Marc Morano, left, interviews Alex Epstein, author of "The Moral Case for Fossil Fuels," on a beach in Southern California. (Photo courtesy of CFACT)

Politicians, media figures, and Hollywood elites who maintain lavish lifestyles while advocating restrictions on carbon dioxide emissions are on full display in a new documentary.

“Climate Hustle 2: Rise of the Climate Monarchy” is a sequel to the 2016 documentary film “Climate Hustle,” which questioned the premise of theories linking human activity with potentially catastrophic climate change.

“Climate Hustle 2” is not in theaters because of the COVID-19 pandemic, but was scheduled to be streamed as of  8 p.m. Thursday and available for replay through Sunday.

The new film builds on the findings of the first one while taking a deeper dive into motivations behind climate change initiatives such as the congressional resolutions called the Green New Deal and the United Nations’ Paris climate agreement, which the Trump administration has exited.

Actor Kevin Sorbo is narrator of the new documentary. In opening scenes, Sorbo cites “an increasing number of scientists who are becoming skeptical” about “overhyped claims made about severe weather events, temperatures, rising sea levels, and even disappearing polar bears.”

Sorbo then asks some questions in arguing that science has shifted against alarmist claims.

“Why would those claiming a global warming catastrophe spread a false narrative?” he asks, adding:

What would motivate them? Why would they try to hustle you? Are they trying to control the climate, or you? …

At its core, the motivations are as old as mankind itself.  They revolve around money, power, ideology, and control. …

Stopping climate change is … about climate elites trying to convince us to accept a future where they call all the shots, plan our lives, and regulate how we should live our lives. They want to create, in essence, a climate monarchy.

“Climate Hustle 2” is a project of the Washington-based nonprofit Committee for a Constructive Tomorrow, or CFACT, which describes itself as promoting “a much-needed, positive, alternative voice on issues of environment and development.”

Marc Morano, the organization’s communications director and editor of  its Climate Depot blog, provides the film’s reporting and interviews key figures on both sides of the climate debate.

Featured climate scientists and researchers include Patrick Moore, co-founder of the environmental group Greenpeace; Richard Lindzen, an atmospheric physicist and professor emeritus at the Massachusetts Institute of Technology; Willie Soon, an astrophysicist and geoscientist based in Cambridge, Massachusetts; Robert Giegengack, a geologist who chaired the Department of Earth and Environmental Science at University of Pennsylvania; and David Legates, a climatologist and geology professor at the University of Delaware.

Morano appears in front of the Palace of Versailles, just outside Paris, to establish some major themes of the film. The palace, he says, was “designed to show the supremacy of the state and the ruling class over the common man.”

“Today, like the nobility of old, world leaders, celebrity activists, and Western environmentalists also enjoy a lavish lifestyle and have no problem with multiple homes, endless airline flights, and luxuries galore,” Morano says.

The action moves to Sicily, Italy, where celebrities such as actors Leonardo DiCaprio and Bradley Cooper, singer Katy Perry, and Prince Harry attend what E! News describes as a “billionaires’ summer party” to discuss climate change. The program’s host comments on gas-guzzling private jets and yachts used by attendees.

Conservative commentator Mark Steyn, who makes multiple appearances in “Climate Hustle 2,” weighs in on motivations he says are behind climate activism.

“Al Gore and John Kerry and the prince of Wales, they want to return us to an Age of Kings in which they fly around from one climate conference to another and the rest of us are just contained within our carbon allowance—which if we’re lucky will enable us to take a long weekend for a fishing trip somewhere once a year,” Steyn says.

Gore, the former U.S. vice president and long-time crusader for limiting carbon emissions to prevent global warming, again comes under scrutiny for the large “carbon footprint” associated with his Tennessee residence and his travel arrangements.

DiCaprio and other Hollywood celebrities who have pledged to “live a green lifestyle” also come under criticism for lifestyles that don’t square with their rhetoric. DiCaprio owns multiple homes and makes frequent use of private jets and yachts, the documentary notes. Singer-actress Barbra Streisand has flown her dogs to London to watch her perform, it adds.

Morano then discusses what science actually says about carbon dioxide.

“If these global leaders and activists really think we face a man-made climate apocalypse, why have they not changed their ways and cut back on their CO2 emissions and overall excess?” Morano asks. “Is there something they’re not telling us about the science?”

Some answers come from scientists, researchers, and academics in the documentary who set out to dismantle alarmist claims that don’t fit with rigorous scientific research.

“Carbon dioxide is the main building block of all life,” Moore, the Greenpeace co-founder, says in a “Fox & Friends” interview used in the film. “In fact, the whole climate crisis as they call it is not only fake news, it’s fake science. There is no climate crisis.”

Giegengack, the geologist, is equally dismissive.

“You don’t find strong empiric support for the idea that atmospheric concentrations of CO2 are the primary drivers of atmospheric temperature and global climate, and there are so many other variables that are much more likely to have been responsible for that,” Giegengack says in the film.

Legates, the climatologist, warns that carbon rationing proposals, such as those advocated by liberals in Congress, ultimately could lead to human beings lacking the “basic necessities of life” such as “food, clothing, shelter, and security.”

Near the film’s close, Sorbo asks viewers to resist the political agenda of climate activism.

“We have the gift of freedom,” he says. “Don’t let it slip away. Don’t let them establish a climate monarchy.”