Staying in Paris Agreement Would Have Cost Families $20K 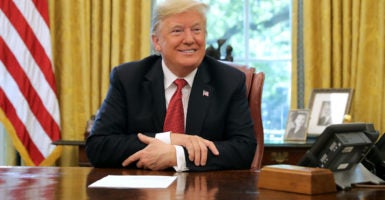 President Trump is right to withdraw from the Paris Agreement, which would not significantly change our climate, but would have dramatic economic costs for Americans. (Photo: Chip Somodevilla/Getty Images)

Pompeo added in his statement, made late Monday:

As noted in his June 1, 2017 remarks, President [Donald] Trump made the decision to withdraw from the Paris Agreement because of the unfair economic burden imposed on American workers, businesses, and taxpayers by U.S. pledges made under the agreement. The United States has reduced all types of emissions, even as we grow our economy and ensure our citizens’ access to affordable energy.  Our results speak for themselves:  U.S. emissions of criteria air pollutants that impact human health and the environment declined by 74% between 1970 and 2018. U.S. net greenhouse gas emissions dropped 13% from 2005-2017, even as our economy grew over 19 percent.

Here’s a version of a previously published article from Heritage Foundation researcher Nick Loris on why the Paris Agreement wouldn’t significantly affect the climate—but would cost America jobs and would hurt some families’ incomes.

President Donald Trump is right to withdraw from the Paris Agreement. While the climate is indeed changing and human activity is playing a role, the chances of looming climate catastrophe are simply unrealistic and not grounded in reality.

Those who are clamoring for action on climate change are the ones who should actually be most upset with what a sham the Paris Agreement is. It’s been celebrated as a breakthrough achievement of the world’s developed and developing countries coming together, but it is anything but that.

With no enforcement mechanisms in place and no repercussions for failing to meet emissions reduction targets, countries are essentially free to do whatever they want, meaning they will continue on their business-as-usual trajectory without making any changes. China, for instance, can peak its emissions in 2030 even though projections have its peak emissions falling before that year.