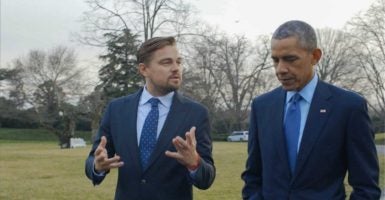 Leonardo DiCaprio released his climate change documentary, “Before the Flood,” on National Geographic.

The actor has become one the largest public faces pushing for action on man-made global warming.

I make a brief cameo in the movie so several friends asked how I felt being lumped in with the climate deniers. (I’ll be setting up my IMDb page any day now).

I simply commented that many climatologists believe the science isn’t settled. I guess that makes me a science denier and a shill for the fossil fuel industry.

To be honest, I hadn’t planned on watching “Before the Flood.” I assumed the film would spit out the same, tired narrative: Industrial progress is destroying the planet and Big Oil is funneling money to politicians and conservative organizations to stop meaningful action on global warming. But I did watch it and such is the case.

There are many claims worth addressing throughout the hour and a half long film. Here are some of the issues that warrant the most attention.

Lifestyle Changes for Thee, but Not for Me

During a moment of self-reflection in the film, DiCaprio admitted his carbon footprint “is probably bigger than most people’s.”

Probably? Leo, you fly around the world on a private jet and have rented one of the world’s largest yachts on multiple occasions. You definitely have a larger footprint.

Yet, a theme throughout the documentary and its supporting website emphasizes lifestyle changes you should make to reduce global warming. The suggestions include: line-drying your clothes, buying a hybrid vehicle, reducing your air travel (and definitely don’t fly first class), buying less meat, and not drinking bottled water.

If people want to eat vegan and buy an energy-efficient dishwasher, that’s their prerogative. Instead, hypocritical elitists would rather tell you how to live your life and encourage government mandates and regulations to enforce those changes.

Not only do these policies restrict your individual freedoms, the film conveniently ignores the costs of these policies, which are significant.

Cumulatively, the federal government’s war on coal along with the regulations on oil and natural gas production, will drive energy costs higher for households and businesses, hitting low-income families hardest.

And what do we get for it all? Another gaping omission from “Beyond the Flood” is how taking action would actually make a difference. Or more accurately, make no difference at all. Even if the U.S. were somehow able to transition to a zero carbon dioxide economy, the planet would be a few tenths of a degree Celsius cooler by the year 2100.

It wouldn’t be a climate documentary without hearing the phrase “The science is settled” or that “97 percent of climate scientists agree.” This 97 percent statistic is nothing more than a false talking point. The figure comes from a 2013 study in Environmental Research Letters that examines the abstracts of nearly 12,000 academic papers on climate change.

Of the more than 4,000 studies that expressed an opinion, “97.1 percent endorsed the consensus position that humans are causing global warming.” But that doesn’t mean 97 percent of climatologists endorse man-made, imminent catastrophic warming.

Experts have a wide range of theories as to the magnitude of warming, the causes, the rate of future warming, etc. To demonstrate just how bogus the 97 percent statistic is, David Legates, former director of Delaware’s Center for Climatic Research, examined the same papers. He found that a mere 1 percent of the 4,014 papers expressing an opinion on climate change claim that the majority of warming since 1950 is man-made.

Despite imagery in the documentary alluding to more frequent and intense natural disasters, the data show no trends for extreme weather events.

“Beyond the Flood” even pays lip service to now debunked climate research, the “hockey stick” graph. The Intergovernmental Panel on Climate Change used the hockey stick for years to illustrate rapid global warming, but it has proven it to be fabricated. Rather than interviewing climatologists who disagree with the concept of imminent catastrophic man-made warming, the documentary labels dissenters as scientifically ignorant deniers.

Carbon Dioxide Is Not Smog

The documentary’s disingenuous misrepresentation of carbon dioxide as a harmful pollutant is another reason not to take “Beyond the Flood” seriously. In DiCaprio’s trip to China to discuss how the country has surpassed the U.S. as the largest emitter of carbon dioxide, almost the entire segment focuses on China’s “airpocalypse.”

The documentary shows China’s massive smog problem where air toxicity levels are high, people are wearing masks, schools have closed, and people can’t go to work. In the same clip, Ma Jun, a director with the Beijing-based nonprofit the Institute of Public and Environmental Affairs, remarks, “In China, people have concerns about climate change. But first and foremost, because their everyday life is affected.”

Carbon dioxide is a colorless, odorless, nontoxic gas. It is a necessary component for photosynthesis and the growth of green vegetation.

There’s no denying China has serious air and water quality problems. But people aren’t wearing masks in China because they’re worried about carbon dioxide. They’re worried about smog. The technology exists to reduce such pollutants and most power plants in China have them installed. However, because it’s cheaper to run the power plant with the scrubbers off, operators do so. If there’s an environmental challenge in our present day that DiCaprio should address, it’s reducing the real pollutants that we know have harmful health impacts.

Perhaps unintentionally, “Beyond the Flood” aptly depicts how energy impoverished the developing world is. More than 1.2 billion people in the world today have no access to electricity. Nearly 3 billion people rely on wood, agricultural residue, and cow dung (shown in the film) for cooking and heating.

One astounding fact DiCaprio says when speaking to a woman in New Delhi is that the number of people without electricity in India is equivalent to the entire population of the United States. It’s morally unconscionable to tell people with such low standards of living they effectively have to stay de-developed.

The priority for places like this is economic development and eradicating poverty. Affordable, dependable power is a staple input for that development. The developing world’s use of conventional fuels should be celebrated, not condemned. It is a sign of better standards of living. Intermittent, expensive renewable power is not going cut it.

In fact, the documentary makes note of Germany’s shift to more wind and solar but nothing of the high costs borne by taxpayers and ratepayers—as well as the country’s shift to more coal as the government decided to decommission its nuclear plants.

Renewables can be part of the energy supply, as can nuclear power, which is largely absent from the film. Nevertheless, meeting the world’s energy needs should be driven by market investments, not the government. Unfortunately, the marchers behind DiCaprio’s drumbeat will overlook this point.

Beyond the Flood, Don’t Believe the Hype

Riddled with inaccuracies, hypocrisies, and half-truths, “Before the Flood” is much like the climate debate itself: all hype, no substance. The bias isn’t surprising, but the fact that people will take this film seriously is.