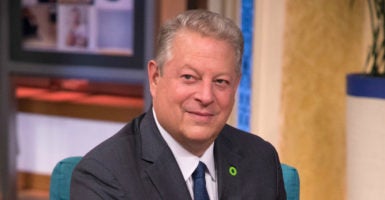 Al Gore’s carbon footprint is the size of Godzilla’s, but to hear the liberal New Republic magazine’s Emily Atkin tell it, it really “doesn’t matter.”

But it doesn’t really matter only if “do as I say, not as I do” has become the credo of Gore and his fellow climate change alarmists.

The size of Gore’s carbon footprint has become an issue with the Aug. 4 theatrical release of “An Inconvenient Sequel: Truth to Power,” the follow-up to “An Inconvenient Truth,” his 2006 global warming horror film.

Inconveniently for Gore, the sequel is bombing at the box office after receiving mixed reviews from film critics and moviegoers alike. The new film has grossed a meager $2.3 million domestically as of Aug. 13, according to Boxofficemojo.com.

As the foremost Chicken Little of the movement warning of impending doom from the burning of fossil fuels that will supposedly cook the planet if the world doesn’t act faster and more furiously to rein in carbon emissions, the former vice president should be leading by example in reducing his own energy consumption.

Yet, according to a report earlier this month from the National Center for Public Policy Research, “Al Gore’s Inconvenient Reality,” the former vice president is still living la vida loca at his Nashville, Tennessee, estate.

While warning of the dire consequences if the rest of us don’t urgently dial back our energy consumption, Gore has not made those same sacrifices himself.

According to the report, compiled from public records requests and information from the Nashville Electric Service, Gore’s 20-room, 10,070-square-foot, Colonial-style mansion consumed an average of 19,241 kilowatt-hours per month—more than 21.3 times that of the U.S. household average of 901 kilowatt-hours monthly.

In the 12-month period from August 2016 through the end of July, Gore burned through 230,889 kWh of electricity, including 66,159 kWh just to heat his swimming pool. The latter alone is enough, the report says, “to power six average U.S. households for a year.”

The mainstream media—which has fully bought in to the climate change hysteria and steadfastly refuses to report the findings of any inconvenient studies that run contrary to the narrative—studiously ignored the findings of the National Center for Public Policy Research.

In “Wizard of Oz” fashion, she essentially says, “Pay no attention to that man behind the curtain.”

Atkin quotes Gore spokeswoman Betsy McManus, who decries the “misleading personal attacks” on the former Tennessee senator, but Atkin then acknowledges that McManus “didn’t dispute [the report’s] claims of Gore’s energy use.”

McManus then asserts that Gore “leads a carbon-neutral life by purchasing green energy, reducing carbon impacts and offsetting any emissions that can’t be avoided … .” But Atkin then concedes that McManus “did not respond to a request for evidence of Gore’s offsets.”

This poses a dilemma for Atkin, who then says we should “set aside the dispute over Gore’s carbon footprint” in favor of a discussion of the “bigger question” of whether prominent climate advocates should be “expected to live a carbon-neutral lifestyle” and whether they’re hypocrites if they don’t.

Rather, they’re “asking governments, utilities, energy companies, and large corporations to increase their use of renewable energy so that you can continue to live your life as you please, without contributing to global warming.”

Oh, really? Does Atkin expect us to forget that in January 2008, President-to-be Barack Obama warned that under his plan for a cap-and-trade system for greenhouse gas emissions, “electricity rates would necessarily skyrocket,” because utilities would face expensive retrofitting mandates, and that those costs inevitably would be passed onto consumers?

That might be of little concern to Gore, who has earned hundreds of millions of dollars from his climate change advocacy and could easily afford to pay higher electric bills, even if they were to “necessarily skyrocket.”

But for the average American, it would greatly affect whether they could continue to live their lives as they please.