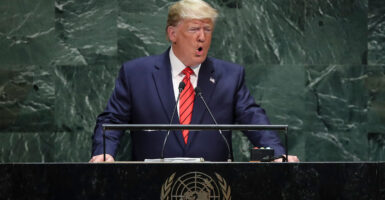 Every year at this time, a majority of the world’s leaders gather in New York at the United Nations for the annual General Assembly debate.

Excited to be on the world stage and to burnish their standing before both international and domestic audiences, leaders are seldom able to restrain themselves to the 15 minutes allotted to them.

Although numerous stories are written about the importance of the event, it has become rote and tedious, with few people paying attention to the entire spectacle.

There are a few speeches, however, to which everyone pays attention. Chief among those is the address of the president of the United States.

Due to COVID-19 quarantine restrictions that would have required visiting delegations to isolate prior to the event, world leaders instead chose to prerecord their speeches. Although not subject to those restrictions, President Donald Trump also chose to submit a prerecorded statement.

The deviation from past practice yielded interesting results. Unfortunately, most leaders followed the pattern of recent years with lengthy, wide-ranging remarks. However, without the pauses for audience applause, even those seemed shorter than in previous years.

Some speeches, however, were significantly more succinct and focused.

Trump’s speech was a perfect example. His previous speeches to the U.N. averaged nearly 40 minutes. This year, at less than eight minutes, the president’s speech crisply laid out his priorities.

He highlighted the U.S. response to COVID-19 and America’s generous support for other nations in this common challenge.

Justifiably, Trump also demanded that China be held accountable for its role in facilitating the spread of the disease by ignoring its legal obligations to report transparently on the outbreak in a timely fashion and to cooperate with the World Health Organization in responding to the outbreak.

Trump pushed back against criticism of his decision to leave the “one-sided Paris climate accord,” boasting that “last year, America reduced its carbon emissions by more than any country in the agreement.”

He also noted America’s strong record in pressing for human rights and challenged the United Nations to be more effective and to focus on the real problems of the world, including “terrorism, the oppression of women, forced labor, drug trafficking, human and sex trafficking, religious persecution, and the ethnic cleansing of religious minorities.”

He touched on his decision to leave the Iran nuclear deal and to impose “crippling sanctions on the world’s leading state sponsor of terror.” He expressed solidarity with the people of Cuba, Nicaragua, and Venezuela who strive for freedom.

Trump predictably highlighted his accomplishments in advancing relations between Serbia and Kosovo and in forging historic peace deals between Israel, Bahrain, and the United Arab Emirates. He teased the possibilities of more agreements in the near future.

Of course, 2020 being an election year, the president emulated his predecessors in taking the opportunity to highlight his accomplishments on trade, the economy, and increasing spending on defense.

In short, he covered plenty of ground without turning the speech into a laundry list of U.S. interests or positions on the myriad issues on the U.N. docket.

Future presidents might want to take note and realize that focusing on priorities helps communicate them. There’s a reason that State of the Union speeches, which often seek to squeeze in too many topics, are rarely memorable.

Over the years, U.N. speeches have tended in this direction to their detriment. Sometimes, less is more.

Overall, the first virtual U.N. General Assembly had few hiccups and stuck to the schedule with far greater fidelity than in the past. In particular, the pace was bolstered by the absence of gratuitous applause from the audience and the lack of need to shuttle speakers to and from the podium.

In addition, the value of this year’s virtual General Assembly versus the annual practice of flying large delegations to New York is worth noting for an organization that proclaims itself focused on reducing carbon emissions.

How many other U.N. conferences could be convened virtually instead of in person to reduce the costs and curb carbon emissions resulting from travel to, and attendance at, large U.N. meetings?

The result should lead everyone to seriously consider making this year’s extraordinary virtual meetings a regular practice.