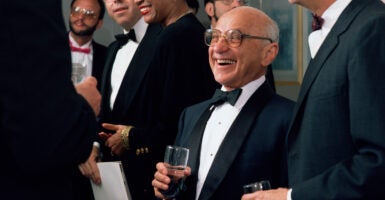 Nobel Prize-winning economist Milton Friedman, seen here attending a charity dinner in his honor in Beverly Hills, California, on Jan. 1, 1986, wrote an essay, “The Social Responsibility of Business Is to Increase Its Profits," that was published 50 years ago this week by The New York Times. Friedman died in 2006 at age 94. (Photo: George Rose/Getty Images)

The New York Times this week published a supplement, “Greed Is Good. Except When It’s Bad.”

The Times based the supplement on an essay from the late Nobel Prize-winning economist Milton Friedman, “The Social Responsibility of Business Is to Increase Its Profits.”

That essay was published by the Times on Sept. 13, 1970. The supplement’s general conclusion was that while Friedman’s ideas might have been appealing 50 years ago, things are much different today.

In fact, it concludes, having corporations focus solely on profit has caused great income inequality and has reduced societal welfare. Numerous statistics are cited showing how those at the top have done much, much better than those at the lower end of the income ladder.

The focus is on the corporation and the concept of corporate social responsibility, which Friedman said should not exist. Most of the scholars and executives that wrote in the supplement disagreed with Friedman.

One example: “We wish to be an economic, intellectual, and social asset in communities where we operate,” wrote Howard Schultz, former chairman and CEO of Starbucks.

While the readers are led to believe this position helps to disprove Friedman, it actually does just the opposite. Schultz took this view because it created the image that Starbucks needed in the marketplace in order to attract customers who traditionally bought a cheap cup of coffee on the run.

Instead, Schultz wanted consumers to buy an extremely expensive cup of coffee, and then sit, relax, buy an expensive pastry or a high-priced sandwich, enjoy the coffee, and socialize, much as they have done for decades in Europe.

Neighborhood-type coffee shops popped up everywhere. They created that image because it was extremely profitable to do so. If that “social asset in the communities” image hadn’t been profitable, they wouldn’t have done it.

Alex Gorsky, chief executive of Johnson & Johnson, also disagrees with Friedman. He says his company always “made clear our responsibilities as a corporation: first to the patients, doctors and nurses, mothers, fathers, and others who use our products and services, then to our customers and business partners, our employees and our communities. And, finally, to our shareholders.”

While the doctors and other medical professionals take an oath to follow that list, the corporation doesn’t—and shouldn’t.

Johnson & Johnson sells products and services used to prevent illness and maintain health. People who purchase its products must have the utmost faith that the product will perform as expected and will do so without side effects.

Consumer confidence is critical here. Corporations must project the image that nearly every stakeholder is more important than profit. That image is itself very profitable for them, oftentimes making it easier to introduce new products because of the brand equity the image builds. If that image weren’t profitable, they wouldn’t project it.

Then there was Nobel Prize-winning and highly respected economist Joseph Stiglitz. He has for decades taken positions that disagree with Friedman.  Stiglitz essentially argues that if corporate “greed” is the only motive, societal welfare would suffer, mostly because government policy could be corrupted by lobbyists employed by profit-motivated corporations.

Stiglitz says that because of market imperfections, “ … firms pursuing profit maximization did not lead to maximization of societal welfare.” He proved this empirically and even noted that Friedman never refuted his work. Stiglitz concludes by saying, “ … and my analysis has stood the test of time. [Friedman’s] conclusion, as influential as it was, has not.”

Friedman, who in 1962 wrote his book “Capitalism and Freedom,” would disagree. In fact, a fuller application of Friedman’s ideas led to the economic boom from 1982 to 2000 (except for a slight hiccup in 1991). The rising tide indeed lifted nearly all boats.

Total societal welfare, Friedman would argue, would be maximized if each individual citizen maximized his or her own welfare. Every American should have the freedom to do so and should be able to fully reap the rewards.

In capitalism, people have a chance to become very successful. In terms of monetary reward, it’s really quite simple: The greater the value of the contribution, the greater the reward.

In terms of perceived social injustices, after corporations have concentrated solely on profits, the stockholders eventually receive those profits. When they do, each is free to spend or donate those funds to any social cause.

It’s important that the corporation make as large a profit as possible, and then each shareholder use the profit as they deem appropriate.

The largest profits are made by corporations where the need in the market is the greatest. When Jeff Bezos and Amazon revolutionized the supply chain and changed the buying habits of hundreds of millions of consumers to vastly improve their lives, he was very well-rewarded, as he should have been.

The U.S. economy has been relatively stagnant for two decades. Economic prosperity occurs when annual growth exceeds 4%. That hasn’t happened since 2000.  The economic policy today should encourage Friedman’s theories and promote individual freedom, individual responsibility, low rates of taxation, and a limited role for government.

That’s what allowed the U.S. to go from the birth of a nation to the largest, most prosperous economy in the world in about 150 years.

Policies matching those principles will continue to make America great.