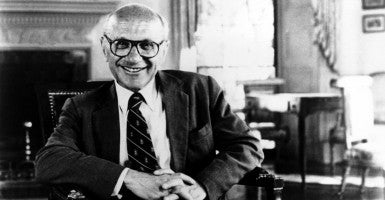 Conservative economist Milton Friedman would have been 103 years old if he were still living today. He won a Nobel Prize for his work in economics and served as an advisor to President Nixon. (Photo: Everett Collection/Newscom)

July 31 is known as a day to honor conservative economist Milton Friedman, as he would have been 103 years old if he were still living today.

Friedman was awarded the Nobel Prize for his work in economics, specifically for “his achievements in the field of consumption analysis, monetary history and theory, and for his demonstration of the complexity of stabilization policy.”

He served as an advisor to President Nixon in the White House and was the president of the American Economic Association before becoming a senior research fellow at the Hoover Institution at Stanford University. Friedman was known for his defense of the free market and call for school choice through a voucher programs.

To honor this great man, here are 22 of his most notable quotes regarding the economy, government, and life.