Once Again, The New York Times Has Glowing Coverage of a Communist Regime 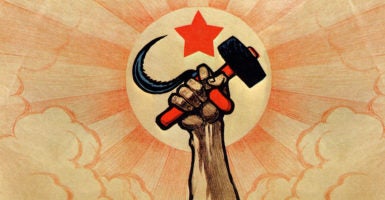 "America may have put the first man on the moon, but the Soviet Union sent the first woman, the first Asian man, and the first black man into orbit—all years before the U.S. would follow suit," tweeted The New York Times. Pictured: A detail of a Ivan Simakov 1922 poster. (Photo: Fototeca Gilardi/Getty Images)

Editor’s note: In its coverage of the 50th anniversary of the Apollo 11 landing on the moon, The New York Times published a series of pieces critical of the U.S. space program, including an article titled “How the Soviets Won the Space Race for Equality.” Promoting that article, the Times tweeted, “America may have put the first man on the moon, but the Soviet Union sent the first woman, the first Asian man, and the first black man into orbit—all years before the U.S. would follow suit.”

Unfortunately, this is far from the only time the Times has been a cheerleader for communism. The following article was first published in 2017.