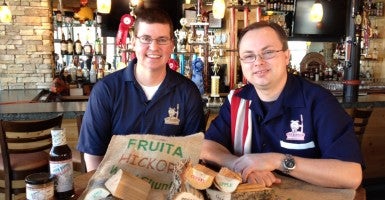 Back in early 2006, a Senate budget debate raged into the night. Around 1 a.m., Hill staffers Heath Hall and Brett Thompson found themselves facing a serious challenge: They could not stomach another night of delivery pizza.

What was worse, they grumbled, they couldn’t think of a single spot offering decent barbecue in the entire Washington, D.C., area.

For Kansas City native Heath, and barbecue convert Brett—the son of a man who was literally allergic to charcoal and made up for it by grilling his way through some 300 recipes in “Weber’s Big Book of Grilling” as an adult—enough was enough.

Fast-forward nearly 10 years and Pork Barrel BBQ products are in over 8,000 stores in the U.S., Canada, Asia and Europe; there’s a Pork Barrel restaurant in Alexandria, Va.; and, including that staff, they employ around 50 people. The brand is synonymous with first place finishes in barbecue competitions nationwide.

Hall, who speaks slowly and thoughtfully, a slight drawl hinting at his Southern-Midwest roots, contemplates this boom with the laid-back approach of someone deciding what to order off a lunch menu: “When we started putting together our first product, we thought ‘Oh, this will be small and fun and for our friends maybe.’”

He laughs, at both their naiveté and the whirlwind success they never could have expected, adding, “It’s been crazy.”

After that late night in 2006, the friends, both lawyers, sat on the idea for another year and a half. Meanwhile, their former boss, Sen. Jim Talent, R-Mo., lost his bid for re-election.

Hall and Thompson left the Senate, landing day jobs elsewhere and remaining friends. They found themselves with considerably more free time, and decided the business idea was worth a real shot, even if it was during the height of the Great Recession.

They started by having friends over to Hall’s house to taste-test their first item, a spice rub. They called the tribunal the “Kitchen Cabinet,” a nod to their time on the Hill.

“Heath is this amazing creative talent with food,” Thompson says of his friend, who has no formal culinary training. “You always wanted to get invited over to Heath’s house. The funny thing was, he often would have nothing planned but you’d go over and he’d take what he had and create these amazing tasting things.”

Based on feedback from their friends, they honed in on a blend of roughly 14 spices and herbs, things like ancho chile powder and garlic, and created what’s now known as the Pork Barrel “All American Spice Rub.” (It generates an impressive five-star rating on Amazon.)

They discovered their skill sets were perfectly complementary (“We joke Heath likes to make food, and I like to make money,” Thompson says), as well as the steep learning curve that comes with food regulation and meeting necessary food handling and preparation standards.

“Had Heath and I not been so determined, it would have been easier to just not start the company,” Thompson says. “The Virginia Department of Agriculture sent us an inch and a half worth of regulations that had to be complied with in order to manufacture your own products. They essentially said that to make our product ourselves we would have to build onto our house a completely separate kitchen, even though we had all of the equipment necessary.” They decided to use a manufacturer in Petersburg, Va., and received their first batch of 2,000 jars of spice rub just after Thanksgiving of 2008. Despite getting landed with barbecue products at the start of winter, they managed to sell a good amount of product to family and friends looking for holiday gifts.

They found a butcher in Alexandria that agreed to buy 12 jars, their biggest sale to date, after the owner admitted to understanding the troubles that can accompany launching a small business.

And then they set their sights on grocery behemoths like Giant and Whole Foods.

“We got the door slammed in our face,” Hall says. “It was a lot of, ‘We have a hundred different spice rubs. We don’t need another one.’”

Discouraged and looking for a free way to market their product, they turned to social media. As it turned out, they were pretty good at it.

“Twitter was still fairly new at that point,” Hall says. “We built up our following to the point where we were the most followed brand in barbecue, more followed than, like, Kraft barbecue sauce.”

Shortly thereafter, they got a call from Mark Burnett’s casting department (“This was at the height of reality TV,” Hall says. “‘Survivor’ and ‘The Apprentice’ were really hot.”). The producers were developing a new show called “Shark Tank” and had stumbled upon Pork Barrel’s Twitter account. They thought the brand might be a good fit.

Brett and Heath eagerly sent in an audition tape—not content with anything standard or boring, their tape featured two members of Congress, a senator, news correspondent Tucker Carlson, and two chefs from “Top Chef”—and were thrilled to find out they’d made the cut.

While they waited to fly out to LA to film, they began grilling in barbecue competitions, something they now do nearly every weekend during the summer. On a whim, before one in Washington, they developed and entered a barbecue sauce in the “Best Sauce in America” contest. Hall’s kitchen skills shone again as the sauce wound up taking second place—and generating a decent amount of press.

Meanwhile, Virginia restaurant developers Mike Anderson and Bill Blackburn were looking to add a barbecue restaurant to their portfolio. It was something they’d never tried, so they wanted to partner with barbecue industry experts to bring a little credibility and competition networking know-how to their venture. They heard about Pork Barrel and reached out.

The four men partnered and began developing the Pork Barrel BBQ restaurant that now sits on a corner in Alexandria, Va.

And then Heath and Brett flew to California.

Watch Hall and Thompson’s appearance on “Shark Tank,” which can be found online, and you’ll notice an enviable confidence and that laid-back swagger mentioned earlier. Even when “shark” Barbara Corcoran, the real estate mogul who wound up investing in the company, tells Hall he looks like he should be the company “mascot,” a pig, he laughs and smiles. “I remember standing there on national television, and there’s 20 cameras on you,” Thompson says. “This is when you know you’ve chosen a great business partner. Barbara says that and, without missing a beat, Heath says, ‘I guess I’ll take that as a compliment.’ Had Heath not handled that so well, I don’t think we would have gotten the deal.”

The deal, as presented on TV, was a $50,000 investment for 50 percent of the company’s business. (If you’re curious, Hall and Thompson say that getting a deal on “Shark Tank” is really just an invitation to continue negotiations off-camera, to allow the sharks to do due diligence on the company. The exact specifics of the deal are unknown.)

“Heath and Brett looked the part,” Corcoran says. “They looked and sounded like two guys who loved to barbecue … they had wild-eyed enthusiasm and seemed like they could have talked barbecue for days if we let them. They were rock solid in all their answers on set … the kind of guys who would not quit when the going got tough.”

Hall and Thompson had to remain mum on the deal for several months, until the episode aired. And then the calls came flooding in.

Corcoran, the pair’s biggest advocate, remains an active owner and adviser in Pork Barrel’s success—and is not without a sense of humor. Hall says he still regularly receives packages containing everything from pig costumes to pig potholders from the mogul.

Since appearing on “Shark Tank” in 2009, Hall and Thompson have continued to grow their business. Hall and Thompson during an appearance on “Fox and Friends”. (Photo: Courtesy Pork Barrel BBQ)

“We got to ring the closing bell at the NASDAQ, traveled all over the place, and within the barbecue world we’re pretty well known,” Hall says. “It’s not a huge segment, but it’s kind of pretty cool. And we get calls from entrepreneurs around the country asking us for advice on how to start a business and things like that.”

They have generated over $10 million in sales, investing most of the profit right back into the company. And they continue to use the “guerrilla-style” marketing tactics Blackburn mentioned, developing “Cue Cologne,” a barbecue scented gag gift for men, and giving out over 2,000 free sandwiches to government employees out of their restaurant during the government shutdown of 2013.

Hall has also testified before the House Small Business Committee on the dangers of overregulation and the necessity of small businesses to economic recovery.

As for the future of Pork Barrel, they hope to continue to expand and rack up accolades at grilling competitions. This year, for the first time, they made their way onto the shelves of Sam’s Club, a big get for the budding company.

“The biggest thing I’ve learned is to celebrate every victory,” Thompson says. “That victory could be completing the forms you have to send into the city for your license, or a little order. You’re going to have successes and failures, and you have to just dust yourself off and get back to it.”