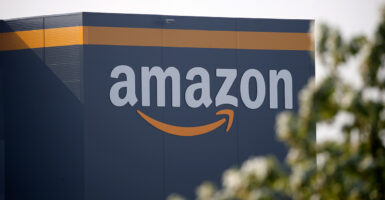 “On behalf of the Jewish community and all who share concern for our lives and safety, we urge you to immediately terminate any association between Amazon Smile and the SPLC,” over 100 Jewish rabbis write to Amazon CEO Jeff Bezos. Pictured: An Amazon logistics center April 13, 2020, in Bretigny-sur-Orge, France. (Photo: Chesnot/Getty Images)

Over 100 Jewish rabbis wrote a letter to Amazon CEO Jeff Bezos, arguing “the SPLC ‘hate map’ is uniquely detrimental and even dangerous to the Jewish community.” The Amazon Smile program relies on the Southern Poverty Law Center to determine which charities qualify for donations.

While the SPLC has a well-established reputation as one of the most anti-Christian organizations in America after its “hate map” inspired a 2012 shooting at the Family Research Council, this is the first time that the Jewish community has publicly spoken out about the danger the SPLC poses to it.

Rabbi Yaakov Menken explained in an interview on “Washington Watch With Tony Perkins” that the SPLC displays a “very apparent bias to mask anti-Semitism coming from certain left-wing groups, especially those groups affiliated with radical Islam.”

In their letter, the rabbis expressed their concern with “the SPLC’s inexplicable omission of groups which ally with international terror organizations, openly glorify murder under the guise of ‘resistance,’ and frequently descend into clearly anti-Semitic expression. The SPLC specifically avoids identifying radical Islamic groups as the leading source of modern-day anti-Semitic violence.”

The SPLC classifies groups based on what they supposedly “hate,” but it shows its bias by having no category for anti-Semitism. This omission is so glaring that the SPLC has found it necessary to try and explain it away in its FAQs. Although it claims anti-Semitic groups are all included in other categories (neo-Nazis and the like), this is just a façade it hopes will allow it to overlook radical Islamic violence entirely.

The rabbis’ letter sets the record straight: “more Jews have been murdered in the past 50 years due to radical Islamic terror organizations than all those groups that the SPLC does mention—combined. This level of dishonesty directly endangers the Jewish community.”

The SPLC doesn’t stop at ignoring Islamic violence against Jews. It proactively partners with the Council on American-Islamic Relations to identify what passes as “Islamophobia.”

But as the letter points out, the FBI and a federal judge found that the Council on American-Islamic Relations “once conspired to provide material support to Hamas, an internationally-recognized terrorist group with beliefs rooted in radical Islam and genocidal anti-Semitism written into its charter.”

Based on who it labels as “hate groups,” the SPLC must believe “Christians can only incite hate, and Muslims can only be its victims,” said the letter. Menken called it a “stunning blind spot.”

In 2019, top SPLC leaders were forced to resign after dozens of employees signed a letter alleging “mistreatment, sexual harassment, gender discrimination, and racism” persisted within the organization.

Menken said that the SPLC has gone off mission. While he said it started out doing good work by rooting out the KKK and other hate groups, “they’ve exploited the goodwill of the public.” Now, he said, it has “decided that promoting a certain ideology is more important to them than fighting hate.”

But the SPLC’s anti-Semitism goes even further. The SPLC classifies pro-Jewish groups as anti-Muslim. This has the effect of allowing anti-Semitic groups to receive funding through Amazon Smile and other partnering programs, while at the same time, “they stop funding for our allies,” said Menken.

Amazon did nothing after 15 members of Congress wrote in August, alerting Bezos about the SPLC’s anti-conservative and anti-Christian bias. Whether it will be more sensitive to the petition from these 100 rabbis remains to be seen.

The rabbis’ concluded their letter with this plea: “On behalf of the Jewish community and all who share concern for our lives and safety, we urge you to immediately terminate any association between Amazon Smile and the SPLC.”