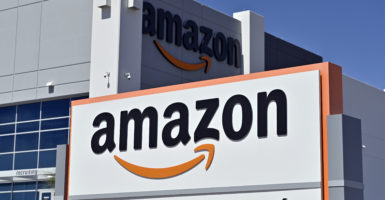 A conservative free-market group hopes to convince Amazon, the world’s largest retailer, not to rely on the Southern Poverty Law Center as a gatekeeper for its philanthropic giving.

The scandal-plagued SPLC, a left-wing advocacy organization, routinely labels mainstream center-right organizations as “hate groups” on a list that includes actual hate groups such as the Ku Klux Klan or neo-Nazis.

“Amazon likes to inoculate themselves from criticism. That’s what our proposal is trying to do is pierce that inoculation,” Justin Danhof, director of the Free Enterprise Project at the National Center for Public Policy Research, told The Daily Signal in a phone interview.

At issue is the AmazonSmile program, in which online buyers may contribute a small percentage of purchase prices to the charity of their choice, whether it’s their church or a nonprofit such as the Red Cross. To the chagrin of conservatives, Amazon allows the Southern Poverty Law Center to decide whether the chosen charity is appropriate.

“Amazon can say, ‘We’re not deciding that the Family Research Council can’t be in the Smile program. Someone else does that. Go yell at them,’” Danhof said in the interview.

“We are piercing that veil with our resolution, making it clear with the tens of thousands who have signed the petition to the [Amazon] board of directors and investor relations: We are holding you accountable for the SPLC being the gatekeeper because you gave them the keys to the gate to keep,” added Danhof, also general counsel for the National Center for Public Policy Research.

The National Center for Public Policy Research is leading a shareholder resolution on viewpoint discrimination to be voted on at the Amazon shareholder meeting next Wednesday.

The shareholders should be aware of the extent to which discrimination against social, political, or religious views by Amazon in its partnerships, content policies, and options for customer-selected charitable donations may jeopardize Amazon’s current market-dominance and may negatively affect important social dynamics beyond Amazon’s immediate business impact. …

We therefore ask and recommend that the report called for include, among other issues at board and management discretion: 1. Risks associated with relying on a partisan and external source to determine eligibility for charitable support from third party customers. 2. Risks associated with regulating content on the platform based on its social, political, or religious viewpoint. 3. A full evaluation of viewpoint bias and associated risks to ensure that Amazon is making balanced decisions and that it is acting consistent with its commitment to diversity.

AmazonSmile, the nonprofit charitable arm of Amazon, has relied on SPLC’s “hate group” list in dropping certain groups from eligibility for receiving donations, Danhof and other critics say.

Amazon’s board of directors has recommended that shareholders reject the resolution targeting the use of SPLC.

“We serve diverse customer sets, operate in diverse communities, and rely on a diverse workforce,” the Amazon board says in its recommendation to shareholders, adding:

The policies and procedures we have in place for our employees, sellers, and customers are intended to foster diversity and inclusion and promote respect for all people. We maintain these policies to facilitate a welcoming environment for our global customers and selling partners while offering the widest selection of items on earth.

At the same time, AmazonSmile allows giving to far-left organizations such as SPLC, Planned Parenthood, and the Freedom From Religion Foundation, according to the National Center for Public Policy Research.

The Southern Poverty Law Center has been besieged by scandal and resignations over the past year regarding allegations of racial and gender discrimination and of widespread sexual harassment.

Critics say Amazon’s reputation is harmed among many consumers by its partnership with SPLC.

The Southern Poverty Law Center did not respond to phone and email inquiries for comment.

Amazon customers so far have donated more than $160 million to nonprofits through AmazonSmile, giving $44 million in fiscal year 2018 alone, according to the National Center for Public Policy Research.

Amazon also has removed content based on political concerns from its sales pages, according to Alliance Defending Freedom.

Pointing to Amazon’s stated leadership principles, the Christian legal organization notes that Amazon’s reliance on SPLC falls short of its goal to “seek diverse perspectives and work to disconfirm their beliefs.”

As the 33rd-largest recipient of AmazonSmile funds, SPLC  apparently has a conflict of interest in also being the gatekeeper determining what groups are eligible, Jeremy Tedesco, senior counsel and vice president of U.S. advocacy and administration for Alliance Defending Freedom, told The Daily Signal.

While his organization backs the shareholder resolution, Tedesco is quick to acknowledge that it won’t get enough votes to be adopted.

“It’s almost impossible to get 51%. You don’t win your shareholder resolution. What you do is raise awareness about an issue that the corporation should be paying attention to,” Tedesco said in a phone interview.

“We certainly want to raise awareness and make sure that shareholders of Amazon and the general public understand that they are irresponsibly outsourcing decisions over what charities can participate in the AmazonSmile program to this completely discredited, far-left advocacy organization that attempts to smear its ideological opponents.”