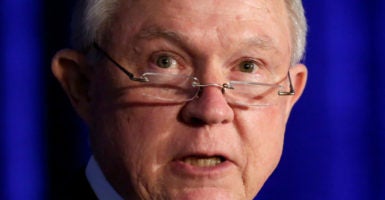 Southern Poverty Law Center spends its time and money attacking veterans, nuns, Muslims who oppose terrorism, Catholics, evangelicals, and anyone else who dares disagree with its fringe ideology. Meanwhile, ADF works every day to preserve and affirm free speech and the free exercise of religion for people from all walks of life and all backgrounds, because we believe freedom is for everyone.

Sessions spoke Tuesday at ADF’s Summit on Religious Liberty in Dana Point, California, in what the SPLC called a “secret” speech.

“We’re concerned that Attorney General Jeff Sessions would make a speech behind closed doors to a group that supports criminalizing homosexuality and marginalizing LGBT people around the world,” David Dinielli, the SPLC’s deputy legal director, said in the release. “For this reason, we have filed a Freedom of Information Act request asking the Department of Justice to make Mr. Sessions’ remarks available promptly. The American public has a right to know what he said.”

The Federalist made Sessions’ speech on religious freedom available here.

>>> Commentary: Media’s Use of This ‘Hate Group’ Label Puts Conservatives’ Safety at Risk

In one timely passage, the attorney general told the ADF gathering:

In all of this litigation and debate, this Department of Justice will never allow this secular government of ours to demand that sincere religious beliefs be abandoned. We will not require American citizens to give intellectual assent to doctrines that are contrary to their religious beliefs. And they must be allowed to exercise those beliefs as the First Amendment guarantees.

We will defend freedom of conscience resolutely. That is inalienable. That is our heritage.

The SPLC’s media office did not respond to The Daily Signal’s phone or email messages by publication deadline. Nor did the organization respond to previous requests for comment.

The latest “hate group” assertion from the Southern Poverty Law Center comes shortly after GuideStar—the largest aggregator of data on charities and other nonprofits across the country—removed SPLC’s “hate group” label from 46 conservative groups in its listings. Alliance Defending Freedom was among them.

They also recalled that Floyd Lee Corkins II, who attempted to gun down staff of the Family Research Council in Washington in 2012, admitted being inspired in part by the SPLC’s “hate map.”

In March, protesters assaulted American Enterprise Institute scholar Charles Murray on the campus of Middlebury College in Vermont, motivated in part by the SPLC’s labeling him as a “white nationalist.”

The Capital Research Center, a conservative watchdog group that monitors nonprofits, noted that Murray supported same-sex marriage and was among conservatives in the “never Trump” movement last year.

The SPLC teaches that those who oppose its radically left-wing policy agenda and its extreme social agenda are not merely misguided, but evil individuals. So it is not at all surprising that the SPLC, which in this case is treating a conservative Christian organization as a hate group, has inspired some Americans to lash out violently at conservatives and Republicans. The SPLC ought to dial back its rhetoric a bit but my guess is it won’t.

Two lawyers, Joseph Levin Jr. and Morris Dees, founded the Southern Poverty Law Center in 1971 in Alabama, with the goal of taking on violent extremist groups such as the Ku Klux Klan and fighting lingering racial discrimination in the South.

The FBI once used the SPLC as a resource. However, over the decades, the organization became focused more on politics.

In 2007, the SPLC labeled the Federation for American Immigration Reform—an organization that advocates strict enforcement of immigration laws—as a “hate group.” After that, it began to go after other mainstream conservative groups.

In 2014, the FBI removed the SPLC from the resource page of its civil rights division.

Other conservative-leaning groups the SPLC labels as “hate groups” include the Center for Security Policy and the David Horowitz Freedom Center. Liberty Counsel, another branded group, has sued GuideStar over use of the SPLC “hate group” designation.

Conservatives long have criticized the SPLC after its metamorphosis from early days exposing the Ku Klux Klan. And a liberal columnist at The Washington Post, Dana Milbank, faulted the group for being too quick to use the term “hate group” to describe organizations with which it disagrees.

GuideStar dropped its SPLC “hate group” labels after the resulting criticism, which also included a Wall Street Journal commentary and pushback from the Philanthropy Roundtable, which advocates “philanthropic freedom.”

The SPLC, a 501(c)(3) nonprofit, has $338 million in assets, according to its most recent available tax filing.

Its president and chief executive, Richard Cohen, reportedly made nearly $350,000 in compensation in 2015.

SPLC has investments in Bermuda and the Cayman Islands, and major financial backers include the Silicon Valley Community Foundation and the W.K. Kellogg Foundation, according to Capital Research Center.

This report has been updated to include a quote from, and link to, Sessions’ speech to ADF.