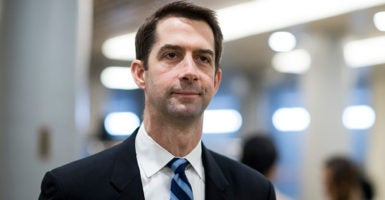 Cotton, R-Ark., said the probe is needed for “protecting taxpayer dollars from a racist and sexist slush fund devoted to defamation.”

The Arkansas lawmaker wrote a letter Tuesday to IRS Commissioner Charles Rettig, calling for the tax agency to probe whether the SPLC should retain its 501(c)(3) tax-exempt status.

“Recent news reports have confirmed the long-established fact that the SPLC regularly engaged in defamation of its political opponents,” he wrote. “In fact, the SPLC’s defining characteristic is to fundraise off of defamation.”

He added, “The business model has paid well.”

The letter notes that the SPLC has $500 million in assets with $121 million in offshore non-U.S. assets. The letter cites a CNN report that said the organization “suffers from a racist culture” and a New York Times article that said employees described the SPLC as “complicit in decades of racial discrimination, gender discrimination, and sexual harassment and/or assault.”

The letter also notes that mainstream conservative-leaning organizations such as the Alliance Defending Freedom, the Family Research Council, and the Center for Immigration Studies were listed on a “hate map” along with the Ku Klux Klan, a known racist domestic terrorist organization.

The Daily Signal contacted the SPLC’s media office, where a spokesman said he would respond to an inquiry as soon as possible. At press time, the SPLC had not responded.

However, SPLC board Chairman Bryan Fair told supporters the organization is trying to deal with its problems.

“Right now, as you may have read, we’re facing some internal workplace challenges. But we’re meeting them in the same way that we’re meeting every other challenge that we face—with a fierce commitment to do justice,” Fair said.

We’ve just launched an initiative with Tina Tchen—a former chief of staff for Michelle Obama and one of the leading voices behind the Time’s Up Legal Defense Fund—to advise us on workplace culture issues.

Everyone who works at the SPLC deserves a workplace that reflects our highest values, and we’re committed to making sure that it happens,” he said.

Morris Dees, the co-founder of the SPLC, stepped down from the organization amid vague charges of discrimination. SPLC President Richard Cohen wasn’t accused of wrongdoing, but also resigned “to give the organization the best chance to heal.” The organization was reportedly fending off a staff revolt.

“Perhaps the SPLC was founded for a notable purpose and decades ago, it performed some good work, but what is left of the SPLC is no longer operating in a consistent manner with the IRS guidelines and applicable law,” Cotton concluded in his letter to the IRS.

“Based on this concerning information, and the flood of recent reports, I encourage you to take immediate action,” he wrote.