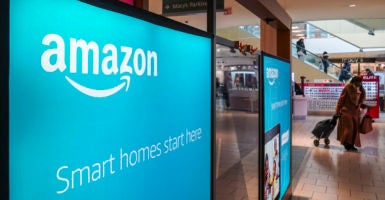 An Amazon pop-up store stands inside a New York City shopping center in March 2019. The Amazon board of directors on Wednesday didn't give conservatives anything to smile about in rebuffing their efforts to dump the Southern Poverty Law Center as its source for vetting charities for donations. (Photo: Drew Angerer/Getty Images)

Amazon shareholders stood by the Southern Poverty Law Center on Wednesday in defeating a resolution that would have curbed the liberal activist group’s power to decide what charities customers can contribute to via purchases made through the nation’s largest retailer.

The SPLC has labeled mainstream conservative groups, such as the Alliance Defending Freedom and the Family Research Council, as “hate groups,” similar to the Ku Klux Klan or Nazi organizations.

“Today, Amazon’s board of directors publicly and unequivocally endorsed viewpoint discrimination against Christian and conservative organizations,” said Justin Danhof, director of the Free Enterprise Project at the National Center for Public Policy Research, which led the shareholder resolution. “The board rejected our request that it reevaluate its reliance on the discredited Southern Poverty Law Center as the de facto gatekeeper of the AmazonSmile charitable program.”

The shareholder meeting took place Wednesday, albeit online in the midst of the COVID-19 crisis.

On AmazonSmile, online buyers can contribute a small percentage of purchase prices to the charity of their choice, whether it’s their church or a nonprofit group, such as the Red Cross. To the chagrin of conservatives, Amazon allows the Southern Poverty Law Center to decide whether the chosen charity is appropriate.

Most Amazon customers aren’t likely aware donations are based on the left-wing political leanings of one organization, said Scott Walter, president of the Capital Research Center, a nonprofit watchdog group that has investigated the SPLC.

“Amazon’s continued reliance on the discredited SPLC means that a company most Americans assume is politically neutral is actually putting a thumb weighing billions of dollars on one side of the political scales,” Walter told The Daily Signal. “Amazon should go back to being a neutral business that isn’t intervening in America’s culture wars in this blatant way.”

The Southern Poverty Law Center has been besieged by scandal and resignations over the past year or so regarding allegations of racial and gender discrimination and of widespread sexual harassment.

“You would think a racial discrimination and sexual harassment scandal would make any nonprofit utterly anathema to corporate America,” Tyler O’Neil, author of “Making Hate Pay: The Corruption of the Southern Poverty Law Center,” told The Daily Signal.

“I think shareholder resolutions can be effective in drawing attention to the shameful reliance on discredited smear factories like the SPLC, and in some cases that pressure may succeed,” O’Neil added.

The SPLC did not respond to phone and email inquiries Wednesday.

Ahead of the meeting, Amazon’s board of directors recommended shareholders reject the resolution targeting the ecommerce titan’s reliance on the SPLC.

“The policies and procedures we have in place for our employees, sellers, and customers are intended to foster diversity and inclusion and promote respect for all people,” the Amazon board told shareholders. “We maintain these policies to facilitate a welcoming environment for our global customers and selling partners while offering the widest selection of items on earth.”