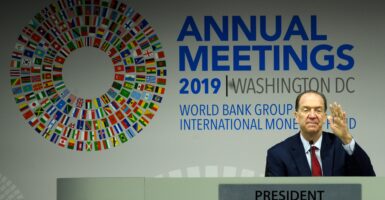 The World Bank recently announced that production of “Doing Business,” one of the bank’s signature annual publications, would be “paused” amid concerns about the integrity and impartiality of data collection and analysis.

Officials said that they would conduct a systematic review and assessment concerning its production.

Such a review is entirely appropriate and a sign that World Bank management is determined to ensure the highest standards in its work.

What no one should doubt, however, is that no matter what flaws or mistakes might be uncovered, the “Doing Business” report has been one of the World Bank’s most important tools in recent years to inspire improved economic governance in its member states.

Since the inaugural edition in 2004, the World Bank’s “Doing Business” report has been instrumental in fostering increased competition among countries to identify and implement the best policies and reforms to create a climate conducive to business formation and success.

Many member nations of the World Bank have been inspired to pursue meaningful policy changes in light of compelling evidence that the timely implementation of transparent and streamlined regulations is critical in paving the way for private sector-led economic development.

Needlessly to say, it’s an enormously challenging task to accurately and objectively quantify complex aspects of interwoven economic and regulatory policies that matter to private sector growth and development across countries of diverse size and various political systems.

Nonetheless, it’s noteworthy that “Doing Business” has identified and documented specific policies that are important in their own right, as well as benchmarks that can serve as practical indicators for the health of the broader regulatory framework.

As Peter Drucker, known as “the man who invented management,” famously noted, “If you can’t measure it, you can’t improve it.”

The timely and decisive action by the World Bank leadership to conduct a review and assessment of the “Doing Business” report should steer this important publication to an even greater embrace of an evidence-based approach to development policies, emphasizing integrity, objectivity, and rigor in evaluating successes and failures.

That will position the World Bank to continue to exercise a powerful, practical influence on improving the entrepreneurial framework in its member nations by helping them to eliminate regulatory and policy obstacles to development, to better position themselves to integrate more fully into world markets, and to foster greater opportunities for business growth and job creation.

Prior to his joining the World Bank as president, David Malpass made a reassuring case for the institution and its core mission by underscoring:

The World Bank has the opportunity to play a key role in fostering broadly shared economic growth and meeting the challenges presented by the 21st-century economy. …

This begins with a commitment to [prioritize] activities that will lead to broad-based growth in each borrower and to a stronger, more stable global economy. …

Malpass clearly understands the power of economic growth and seems determined to focus the World Bank on what works in delivering measurable, tangible outcomes.

The “Doing Business” report is surely an important tool in that effort.