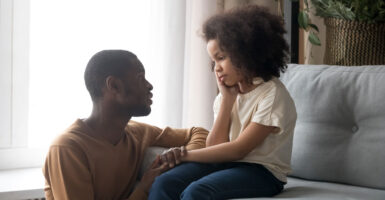 The Supreme Court’s ruling in Bostock v. Clayton will make it even more difficult for parents to educate their children in line with their values. (Photo: fizkes/Getty Images)

Melissa Moschella, an assistant professor of philosophy at The Catholic University of America, is a visiting scholar in the B. Kenneth Simon Center for American Studies at The Heritage Foundation.

The Supreme Court’s recent decision in Bostock v. Clayton, which ruled that the Title VII prohibition on sex discrimination in employment extends to discrimination based on sexual orientation and transgender status, is likely to have more widespread implications than many people realize.

Many (including Justice Samuel Alito in his scathing dissent) warn that the ruling may undermine religious freedom and freedom of speech, as well as women’s athletics and women’s privacy in bathrooms and lockers rooms. Yet few have considered how Bostock may imperil the fundamental right of parents to educate their children in line with their values.

The current culture already makes it difficult for parents to teach their children that, for instance, maleness and femaleness are grounded on objective biological reality rather than subjective self-perceptions, or that the purpose of human sexuality is not ultimately pleasure or self-expression, but to unite a man and woman in marriage and enable them to form a family.

And whatever one’s beliefs about these issues, parents, not the state, should be the ones to decide what their children are taught about these controversial and sensitive matters.

Many parents who seek to pass on a traditional understanding of sexuality send their children to private or religious schools where these values will be taught and modeled—or at least not directly undermined, as they are in an increasing number of public schools. But will private and religious schools be able to teach and model these traditional understandings of sexuality in the wake of Bostock?

What happens when the first-grade teacher Ms. Clark announces that she is transgender and henceforth expects to be treated as Mr. Clark? According to Bostock, a school that fires Ms. Clark because her gender transition will confuse students and undermine the school’s mission would violate Title VII’s prohibition on sex discrimination.

Thankfully, the Supreme Court just strengthened the ministerial exception in Our Lady of Guadalupe v. Morrissey Berru, offering a broad interpretation of who counts as a “minister” that likely extends to any teacher, and perhaps even other employees.

But schools will have to fight for these protections in court when challenged, and the fight itself will be punishing. Further, what about private nonreligious schools that are not eligible for these exemptions?

LGBT activists will also seek to get courts to apply Bostock’s expansive redefinition of the meaning of sex discrimination to Title IX of the Education Amendments of 1972, which prohibits discrimination on the basis of sex in any school or educational program that receives federal financial assistance.

Justice Neil Gorsuch’s majority opinion explicitly declines to address questions about bathrooms, locker rooms, women’s sports, and so on. But the logic of Bostock implies that it would violate Title IX, for example, to prevent a student with male anatomy who identifies as female from changing and showering in the girls locker room or competing on the girls track team.

These implications of Bostock’s logic could also affect the many private and religious schools that receive federal financial support indirectly through states and school districts that fund things like busing, textbooks, or free meals for low-income students.

If a second-grade boy at a Catholic school declares himself to be a girl and wants teachers and other students to treat him as such, will the school be forced to comply to avoid a lawsuit, regardless of whether this contradicts the school’s religious teachings?

If, as is plausible, the answer to that question is yes, a growing number of parents will have no choice but to send their children into an educational environment that may sow profound confusion about the basic truths of human identity.

Further, insofar as Bostock is interpreted (perhaps mistakenly) as affirming that sex is determined by a person’s inner sense of gender identity rather than by biology, parents of gender-confused children may find themselves unable to protect their children from the “gender-affirming” path of social transition, puberty blockers, and eventually cross-sex hormones and surgery.

Never mind that the vast majority of gender-confused children naturally come to accept their biological sex if allowed to undergo puberty, or that the “gender-affirming” path has not been proven to resolve gender dysphoria in the long run, and results in permanent loss of fertility and serious long-term health risks.

Such arguments were of no avail to the Ohio parents who lost custody of their teenage daughter because they would not allow her to begin hormone treatments to transition to a male gender identity. The combined legal and cultural impact of Bostock threatens to make such tragic cases increasingly common.

The dangers of Bostock for parental rights are grave, but not entirely unavoidable. To avert these dangers, we need to take proactive steps to prepare for the challenges to come.

Specifically, it is now more crucial than ever to oppose state and federal legislation like the Equality Act, which would further undermine the freedom of private and religious schools to hire in line with their mission and values, and mandate admittance to single-sex facilities and sports based on gender identity.

Such legislation could even lead to court-mandated curricula promoting radical views of gender and sexuality in all public schools.

Parents and all concerned citizens should tell their elected officials they want laws clarifying that single-sex sports and private facilities do not constitute discrimination, but rather are essential to maintain fairness and protect student privacy and safety.