Supreme Court Deserves Praise for Reversing Itself on Takings Clause 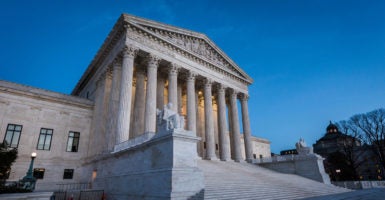 "The Supreme Court finally owned up to the mistake it made in the Williamson County decision," writes Paul Larkin Jr. (Photo: Geoff Livingston/Getty Images)

Our constitutional system assumes that federal courts serve to remedy an injustice created by officials in the legislative and executive branches. Unfortunately, federal courts, even the Supreme Court, sometimes are responsible for creating an injustice.

Thirty years ago, the Supreme Court did that for property owners in Regional Planning Commission v. Hamilton Bank of Johnson City. On Friday, in Knick v. Township of Scott, the court ended that injustice by overruling Williamson County by a 5-4 vote.

For more than 30 years, people with claims under the Fifth Amendment’s takings clause have been told, “Get in the back of the bus. You are not allowed to go to federal court to seek relief for a claim that a state official has taken your property without just compensation.”

Those are fair questions. The answer is that the Williamson County decision—a ruling only a lawyer could love—was responsible for that outrage.

Second, overly burdensome state regulations can amount to a “taking” of private property if those rules deny someone the opportunity to make use of, or make a profit from, his land without guaranteeing him “just compensation.”

Third, federal law—the Civil Rights Act of 1871—expressly guarantees everyone a right to sue for relief for a state or local federal constitutional violation.

Together, these three well-established principles should permit someone to claim that a state or local statute, ordinance, or regulation, or the action of an executive official, has the effect of taking his land, which would then entitle him to some type of relief for the harm he has suffered.

This may seem simple, but few legal issues can’t be mucked up by judges, even those on the Supreme Court.

In Williamson County, the Supreme Court concluded that a person has not stated a takings clause violation until he proves that the state will not compensate him for his losses, and he cannot know the answer to that question until the state courts have rejected his takings clause claim.

That is far from obviously reasonable. If the state has not already paid the property owner, and if there is no state law equivalent of a workers’ compensation system—that is, if a property owner cannot just file a claim and receive payment—there should be no doubt that the state will not pay him. Requiring him to ask the state courts to tell him the obvious is just a waste of time.

The one saving grace of the Williamson County decision is that it appeared to give the landowner the opportunity to return to federal court once the state courts told him the government would not compensate him.

Rather than cutting him off at the knees, Williamson County seemed merely to order the landowner to wade out to knee-level before returning to federal court.

But that’s not how it worked out.

This brings us to the Supreme Court decision 20 years later in San Remo Hotel, L.P. v. City and County of San Francisco. There, the court held that a person whose just compensation claim is rejected by the state courts cannot relitigate that issue. Why? Because the state court decision is final and cannot be relitigated in federal court.

The average person would find it shocking to see a lawyer try to persuade a court to adopt such an obvious catch-22, but the Supreme Court bought the argument and this injustice was allowed to stand for over 30 years.

Rose Mary Knick owns land in Pennsylvania on which a graveyard might contain the ancestors of her neighbors.

In 2012, the township passed an ordinance saying that cemeteries must be open and accessible to the pubic during daytime. The township later told Knick that she was in violation of the ordinance. She sued to have the township’s actions declared a “taking,” but ultimately lost because of Williamson County.

On Friday, the Supreme Court finally owned up to the mistake it made in the Williamson County decision.

The rationale underlying the takings clause, the court reasoned, also demanded that result. Once the state has taken someone’s property, the owner enjoys “an irrevocable” federal constitutional “right to just compensation,” regardless of whatever procedures the state might adopt to pay him.

As Roberts quite colorfully put it, “A bank robber might give the loot back, but he still robbed the bank.”

After finding its decision in Williamson County to be wrong in a variety of ways, the court decided that stare decisis—or respect for precedent—principles did not prevent overruling it.

“Williamson County was not just wrong,” the court concluded. Its “reasoning was exceptionally ill-founded” and inconsistent with the court’s earlier takings clause cases.

The Williamson County “state-litigation requirements has been a rule in search of a justification for over 30 years.” Stare decisis considerations also count for less when remedial decisions are at stake, because they “do not ‘serve as a guide to lawful behavior.’”

Justice Elena Kagan, joined by Justices Ruth Bader Ginsburg, Stephen Breyer, and Sonia Sotomayor, dissented. She concluded that Williamson County was correctly decided and that, in any event, stare decisis principles militated against overruling it.

The Knick majority deserves kudos for its action. For more than 80 years the Supreme Court has relegated property rights claims, as the court noted in that case, “to the status of a poor relation.”

Members of the intellectual class have long deemed property rights too plebian to be worthy of their interest or robust legal protection, notwithstanding the fact that only a strong, legally protected system of property rights enables the academy to be both condescending and employed because of the contributions made by people who own property.

Property rights, they contend, must be gradually withered in the same way that a slowly dripping stream of water will erode the strongest boulder onto which it falls.

Were it not for public interest organizations, such as the Pacific Legal Foundation, which represents people such as Knick for free, state officials would, through litigation, wear out all but the wealthiest property owners.

After all, the Knick case was captioned “Rose Mary Knick v. Township of Scott,” not “Bill Gates, Mark Zuckerberg, Larry Page, or Sergey Brin v. Township of Scott.” Any one of them could buy a county or state that sought to take their land. People like Knick cannot even defend their own land in court.

Finally, the court properly decided that stare decisis considerations did not justify leaving in place the “preclusion trap” set by Williamson County and sprung by San Remo.

I have harshly criticized the court’s decision in Williamson County because its ill-considered ruling jeopardized the property rights of average people.

It is always difficult to admit that one made a mistake, particularly a big one, and the Supreme Court consists of nine people, so it is difficult for them to confess that they flubbed one. That the court did so in Knick is praiseworthy.

Courts expect people to “fess up” when they go astray. Just ask any offender facing sentencing. It is only reasonable to expect the same response from a judge who makes a mistake.

Five members of the Supreme Court did just that Friday. We owe them our thanks for doing what they expect everyone else to do in the same circumstances.