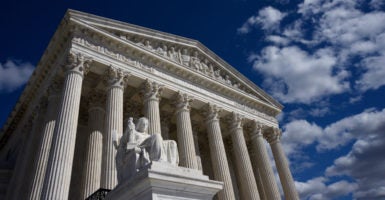 The Supreme Court will decide whether it will be Catholic schools or judges and bureaucrats who determine whether teachers are adhering to Catholic doctrine in their duties, including teaching religion class to young children. (Photo: Robert Alexander/Getty Images)

The Supreme Court will hear oral arguments Monday in a pair of consolidated cases, Our Lady of Guadalupe School v. Morrissey-Berru and St. James School v. Biel, that will examine the so-called ministerial exception.

That’s a legal doctrine that protects freedom of religion by exempting religious institutions from the application of anti-discrimination laws to employees who carry out important religious functions.

In this case, the court will decide whether it will be Catholic schools or judges and bureaucrats who determine whether teachers are adhering to Catholic doctrine in their duties, including teaching religion class to young children.

The case was supposed to be heard in April, but was rescheduled to May 11, due to the COVID-19 pandemic. It will be heard via teleconference.

Here’s what happened in Our Lady of Guadalupe School v. Morrissey-Berru:

Our Lady is a Catholic school that provides education to young people steeped in Catholicism, its faith and traditions. In 2015, the school decided not to renew Agnes Deirdre Morrissey-Berru’s contract as a teacher.

The issue in St. James School v. Biel is nearly identical, and the Supreme Court will hear both arguments at the same time, in the interest of time and the cases’ similarities.

At the heart of these cases will undoubtedly be a zealous discussion of what defines the “religious duties” of a teacher and the scope of a religious employer’s “ministerial exception” from anti-discrimination laws.

The Supreme Court will likely inquire about the 9th U.S. Circuit Court of Appeals’ ruling. That court sided with Morrissey-Berru’s discrimination lawsuit and said that although she had some “religious duties,” they were not “religious enough to warrant First Amendment protections” under the ministerial exception legal doctrine. Expect a lengthy discussion about this concept during oral arguments.

This isn’t the first time this issue has been before the court.

In 2012, the Supreme Court unanimously ruled in Hosanna-Tabor Evangelical Lutheran Church and School v. EEOC, establishing that religious organizations do have a First Amendment right to select their own religious ministers, teachers, or employees, without government interference.

It was the first case to apply the ministerial exception doctrine and, given that the justices are hearing a similar case on May 11, it’s clear that some of the issues have yet to be resolved.

As a Daily Signal article reported on the case back in 2012, the earlier case was a “major win for religious freedom” because the “Court clarified that the protections of the ministerial exception are not limited to cases where a religious group fires a minister only for a religious reason,” among other things.

However, as a Federalist Society commentary summarized it in 2019:

Hosanna-Tabor understandably did not answer all questions about how the doctrine operates.

Some of those questions are important. Such as how to determine what a religious ministry is, who a religious minister is, what types of government interference are impermissible, and how a substantive right grounded in both Religion Clauses should operate at a procedural level.

To give concrete examples: does a Jewish day school count as a ministry, even if it has an equal opportunity policy that forbids religious discrimination in employment, receives government funding, and accepts non-Jewish students?

Is the principal of a Catholic elementary school a minister, even if she has neither formal religious training, nor an explicitly religious title?

That’s something that courts and bureaucrats do not have the competence to do.

The ministerial exception does not negate all claims against a religious employer. It creates an exception that protects employers of religious institutions from getting sued every time an employee decides he or she isn’t going to act in accordance with religious doctrines, gets fired, and wants to retaliate.

Given that the First Amendment’s Free Exercise and Establishment clauses should prevent government officials from meddling in the way religious organizations hire employees to carry out religious functions—or fire them when they don’t—this is an important case, and the distinctions they discover will aid future cases of a similar nature.