How Close Are We to a COVID-19 Vaccine? Here’s What to Know 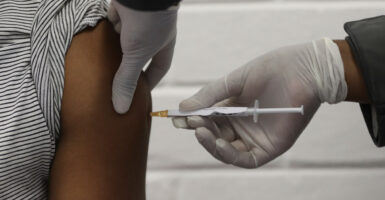 One of the first South African Oxford vaccine trialists looks on as a medical worker injects him with the clinical trial for a potential vaccine against the COVID-19 coronavirus at the Baragwanath hospital in Soweto, South Africa, on June 24, 2020. (Photo: Siphiwe Sibeko/Pool/AFP/Getty Images)

The United States has been grappling with a response to the COVID-19 pandemic for more than six months, but now, a series of published results from vaccine developers raises the hope that a definitive end to the pandemic might be in sight.

The race for a COVID-19 vaccine began at the end of January, and the administration’s announcement of Operation Warp Speed greatly accelerated the process by providing unprecedented funding to help execute the necessary research and take out the financial risk of developing and manufacturing the potentially successful vaccine candidates.

The initiative has already borne fruit. Two pharmaceutical companies, AstraZeneca and Moderna, this month begin the final phase of clinical trials before approval and distribution.

There are three phases of clinical trials before a new drug can be sold and distributed, which are meant to ensure that the drug is safe, that it works, and that it works better than the existing course of treatment.

Typically, drug development takes several years before drug approval, and the fact that there are two phase 3 trials beginning seven months after the first COVID-19 case was confirmed in America reflects the amount of resources being devoted to vaccine development and the breathtaking speed at which it is happening.

By comparison, the vaccine with the shortest time to approval up to now has been the mumps vaccine, which took four years to develop.

Much of the speed comes from the ability to recruit participants to gather enough data and ensure the safety of the vaccines.

In phase 3, the companies participating in Operation Warp Speed are required to enroll at least 30,000 volunteers, and AstraZeneca intends to recruit 50,000 participants.

Phase 1 results for these companies’ drugs both showed promise of safety and efficacy. Efficacy was assessed by comparing the immune response in the blood of volunteers to that of the blood of recovered COVID-19 patients.

Neither study found serious adverse reactions to the vaccines, although mild to moderate reactions, such as injection site pain, muscle aches, or fevers and chills, were not uncommon.

That’s to be expected and they are signs that the immune system is working. One person in the Moderna study developed a rash, but it subsided.

Aside from safety, the important result is the immune system’s response to the vaccine. Again, both vaccine trials showed promise.

The Moderna study tested three different doses of its vaccine to determine what dosage will be necessary for the final vaccine, and measured the response in two types of antibodies, binding and neutralizing, and in T-cell response.

Binding antibodies bind to the virus and assist other immune cells in destroying it, whereas neutralizing bodies, which are thought to be more effective, directly attack the virus.

T-cells are immune cells that can specifically seek out the virus, signal other immune cells, and attack the virus itself. Together, T-cells and antibodies make up two arms of the body’s acquired immune system.

Even at the lowest dose, the Moderna vaccine stimulated binding antibodies in all participants by Day 15 and exceeded the levels in convalescent serum by Day 36.

There was a T-cell response, showing one type of T-cell involving cell signaling, but the type of T-cell that directly attacks the virus was present only in low levels after the second dose.

The AstraZeneca vaccine measured neutralizing antibodies, and a single dose of it was able to elicit a response comparable to convalescent serum by Day 28, and a booster dose increased the antibody activity in all participants. This vaccine also elicited a robust T-cell presence by Day 14.

Together, these studies represent a great hope that a safe and effective vaccine may be on its way sooner rather than later. They both elicit an antibody response at the tested doses that are of similar concentration to convalescent serum, and the AstraZeneca vaccine also stimulated a cellular immune response that seems increasingly important to fighting off a SARS-CoV-2 infection.

The vaccines aren’t a done deal yet, however. Only the phase 3 trial can provide a definitive answer as to the efficacy of a vaccine.

It won’t be until fall at the earliest that the phase 3 trials will conclude, so the world will have to be patient for a little while longer, but if these results hold true, the effective end of the pandemic may be in sight.