Trump: COVID-19 ‘Will Get Worse,’ but Vaccine Moving Along 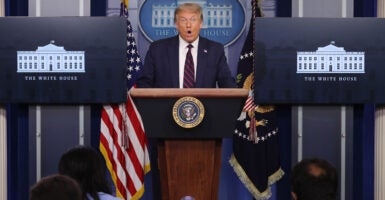 In his first coronavirus press briefing since April, President Donald Trump sounded dour, warning the pandemic will get worse before it gets better, but also offered his more familiar optimistic tone in predicting a vaccine sooner than expected.

The president also made a more emphatic case in favor of wearing masks, even pulling one out of a suit pocket during the briefing.

“It will probably, unfortunately, get worse before it gets better—something I don’t like saying about things, but that’s the way it is,” Trump said Tuesday from the White House press briefing room. “It’s what we have. Look over the world, it’s all over the world.”

Trump later said TV commentators make it sound as if only the United States has the problem, when in fact it’s a problem all over the world.

“The China virus is a vicious and dangerous illness,” Trump said.

Currently more than half of the nation’s new cases are in Arizona, California, Florida, and Texas. Those states still haven’t been hit as hard as New York, New Jersey, and Connecticut were early in the year.

“We want to get rid of it as soon as we can. That is why getting a vaccine remains a top priority,” Trump said. He went on to provide more specifics.

Two vaccine candidates are entering the final stage of clinical trials this month. This was achieved in record time. It used to be years before you were in a position like we are in right now.

Four other vaccines will enter final trials the following weeks. We are mass producing all the top candidates so that the first approved vaccine will be available immediately. Logistically, we have the military ready to go.

The briefing was considerably shorter than past briefings that would run close to two hours, as Trump, in the past flanked by Cabinet officials and top administration medical officials, would seemingly answer questions endlessly. On Tuesday, only Trump spoke to reporters, and the briefing was barely 30 minutes. Also, unlike occasional past briefings in March and April, there were no testy exchanges between Trump and the media.

Trump noted that about half of the deaths were individuals in nursing homes or long-term care and about 90% of those hospitalized had underlying medical conditions.

While youth are less likely to be hit hard, Trump nevertheless made the case to wear masks to avoid the spread.

We are asking everybody that when you are not able to socially distance, wear a mask, get a mask. Whether you like the mask or not, they have an impact, they’ll have an effect—and we need everything we can get.

“We’re instead asking Americans to use masks, socially distance, and employ vigorous hygiene, wash your hands every chance you get while sheltering high-risk populations,” the president stated.