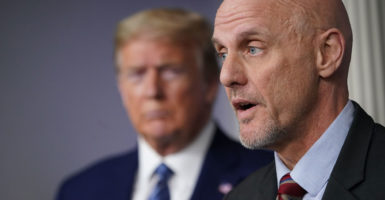 The government’s contracting for large quantities of a product is the quickest, most effective mechanism for incentivizing expansion of manufacturing capacity. Pictured: Dr. Stephen Hahn, commissioner of the Food and Drug Administration, speaks to reporters April 21 during the White House's daily briefing on the coronavirus. (Photo: Mandel Ngan/ AFP/Getty Images)

Pharmaceutical and biotech companies, in collaboration with scientists in academia and government, are working flat-out to develop drugs and vaccines to treat or prevent COVID-19.

Although a vaccine is still months away, policymakers and the public should ask now: If and when their efforts succeed, will there be sufficient manufacturing capacity to meet the likely enormous demand?

Fortunately, thanks to legislation passed by Congress back in 2004, President Donald Trump and his administration already have the authority they need to support and incentivize private companies with the relevant expertise and skills to build out manufacturing capacity as quickly as humanly possible.

Private industry faces significant risks in building manufacturing capacity at this stage. Given the national interest in making a vaccine available, the president should task his administration with acting now to prepare this capacity.

The Project BioShield Act of 2004 gave the Department of Homeland Security authority to determine if a chemical, biological, or radiological agent presents “a material threat against the United States population sufficient to affect national security.”

Any such determination by DHS automatically triggers additional authority under the law for the government to issue contracts to purchase countermeasures for the designated threat, such as drugs or vaccines, using the Strategic National Stockpile and the BioShield Special Reserve Fund.

The law also specifies modifications to standard federal procurement rules in such circumstances, to enable applicable agencies to acquire those countermeasures quickly.

Importantly, the law further specifies that the federal government can use these powers to purchase countermeasures not yet approved by the Food and Drug Administration, but for which the Department of Health and Human Services finds that there is sufficient scientific data to “support a reasonable conclusion that the countermeasure will qualify for approval or licensing within 10 years.”

The Trump administration can exercise authorities under the BioShield Act to contract for bulk purchases of promising new therapies and vaccines.

Doing that would create powerful incentives immediately for the private sector to invest in quickly adding, or repurposing, manufacturing capacity to meet demand.

Because this authority enables the government to “preorder” products before companies even have formatted them into finished dosing suitable for mass production, work on building out manufacturing capacity can start as soon as a contract is signed.

By committing in advance to buy large volumes of promising therapies and vaccines, the federal government would, in effect, be offering to share with pharmaceutical and biotech companies (and, by extension, any banks or investment funds that they go to for additional capital) the potential downside risk that some products might later prove to be less effective than anticipated.

In other words, large preorders from the federal government immediately would shift the risk/reward calculus for private investment in expanded manufacturing capacity from “caution” to “full speed.”

Drug manufacturing is a complex and technically sophisticated field, and the manufacture of biologic products (such as vaccines) is even more so.

Given that virtually all of the relevant expertise, and associated highly skilled workers, are found in private companies, policymakers must rely on those companies to provide the necessary production.

The simple fact is that no one else can do it either as well or as fast. And as previous experiences with wartime procurement shows, the government’s contracting for large quantities of a product is the quickest and most effective mechanism for incentivizing manufacturing capacity expansions in any industry.

Beyond rapid expansion of manufacturing capacity, this approach offers other benefits as well.

One important ancillary benefit is that prices would be lower than what they might be otherwise.

When the federal government negotiates a large purchase contract with a private company, both sides know that successfully reaching agreement will result in significant cost savings from efficiencies associated with larger-scale manufacturing, as well as a lower per-unit premium needed to give the innovator company an attractive return on the substantial investments it made to create the product.

The result is a contract for large quantities at a lower unit-price—a win-win for both sides.

Another potential benefit is that others could “piggyback” on the U.S. government’s “first-mover” action by entering into their own bulk purchase contracts, on similar terms, with the same companies for the same products.

That might include not only governments of other nations but also private actors, such as charitable organizations that provide medical assistance in poor countries.

To the extent that occurs, companies would have an even clearer picture of the total expected demand, and even more private funding would be attracted by the investment opportunities presented by such demand.

It also would reduce the likelihood of shortages that might lead nations to impose export controls or otherwise try to divert supply.

What Policymakers Should Do

—The Department of Homeland Security should issue a determination that the COVID-19 virus is a “biologic agent” that constitutes a “material threat,” exercising the process provided for in the BioShield Act.

—The Department of Health and Human Services should build on its work with private companies developing COVID-19 vaccines and therapies to identify as soon as possible products that meet the law’s tests for being promising “countermeasures.”

—The departments of Homeland Security and Health and Human Services should take steps to be ready to contract as soon as possible for large quantities of any promising countermeasures, such as by developing projections for likely demand and by drawing up distribution priorities.

Of course, those projections and priorities will vary based on whether a given product is focused on prevention or treatment, as well as the specific illness effects and degree of severity targeted by the product.

Even so, preliminary projections and priorities can be developed now and then updated as researchers and clinicians learn more about the disease itself and companies test the products they are developing.

—The president should advise Congress on whether additional funding is needed for these purposes—particularly for the Strategic National Stockpile and the BioShield Special Reserve Fund—and if so, specify recommended amounts, agency allocations, and how all or part of the request can be met via transfers from lower-priority programs funded in Congress’ recent COVID-19 relief bills.

We don’t yet know which of the hundreds of drugs or vaccines now in development for COVID-19 will be successful.

The good news is that, as scientists race for a cure, the government already has the tools it needs to identify any leaders as they emerge from the pack and then partner with the private sector to speed drugs or vaccines as soon as possible to those who need them.