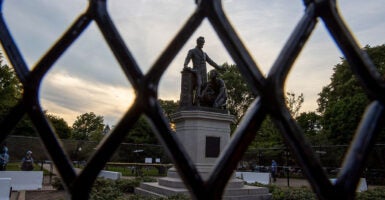 Protesters for and against the removal of the Emancipation Memorial debate in Lincoln Park on June 26, 2020, in Washington, D.C. (Photo: Tasos Katopodis/Getty Images)

Prominent African American leaders and others are rallying around a statue in Washington, D.C., depicting President Abraham Lincoln freeing a slave.

“We do not believe that America is so systematically racist that we should divide ourselves now and start having discussions with domestic terrorists about which statues stand and which statues fall,” Star Parker, president of the Center for Urban Renewal and Education, said at a rally Tuesday in the District’s Lincoln Park.

“This country was founded on the rule of law, and if [this] statue should come down, then it is up to the local governments and local city councils and local mayors to make that determination,” she said.

On June 23, protesters surrounded the Emancipation Memorial in Washington’s Lincoln Park, the largest park on Capitol Hill, vowing that “we’re tearing this motherf—ker down.” The threat was captured in a video tweeted by Richie McGinniss, chief video director for The Daily Caller.

The Emancipation Memorial was erected in 1876, the result of the efforts of Charlotte Scott from Virginia, who “used the first $5 she earned as a freedperson to start a fundraising campaign to build a statue in Lincoln Park,” according to the National Park Service.

Parker said some people aren’t aware of what the statue actually endeavors to depict.

“Contrary to claims of these dismantlers, many in the historical debate contest that Archer Alexander, the freed slave, is not kneeling, but is getting up to embrace his freedom,” she said. “This Archer Alexander memorial is too important in American history to be hidden away in a museum just to appease a mob or the insecure that thinks they need safe space.”

On June 23, the same day the protesters threatened to tear down the statue, congressional Delegate Eleanor Holmes Norton, D-D.C., said that she would introduce legislation to remove the monument.

“Although formerly enslaved Americans paid for this statue to be built in 1876, the design and sculpting process was done without their input, and it shows,” Norton said in a press release, adding:

The statue fails to note in any way how enslaved African Americans pushed for their own emancipation. Understandably, they were only recently liberated from slavery and were grateful for any recognition of their freedom.

However, in his keynote address at the unveiling of the statue, Frederick Douglass pointedly did not praise the statue, and, indeed, in private remarks went as far as to say, ‘[I]t showed the negro on his knee when a more manly attitude would have been indicative of freedom.’

Parker said she’s calling on President Donald Trump to use “this location in Lincoln Park to be the home of his new National Garden … and that the park be renamed Unity Park, to not only capture the theme of American heroism that illuminates all ethnicities in our nation, but also to shine a light on our one set of principles and on our one God.”

Schaub said that Alexander, depicted in the memorial, “is neither kneeling nor standing. He is in a half-risen posture, poised on the brink of possibility. The statue acknowledges that emancipation by law or under law is only the beginning of an arduous journey.”

Instead, his gaze is fixed forward—eyes on the prize. He sees the vast future ahead for himself and for his people. Although his widened prospects come as a result of the Emancipation Proclamation, the freedman is intent on his own self-realization, his own agency.

Too many are so woke, yet so blind. But truth opens blind eyes. [Frederick] Douglass was fearless in speaking it. He understood that courage doesn’t need a crowd. It just needs relentless conviction.

Today, we stand in solidarity against chaos and anarchy, and those who try to tear down truth under the guise of racial justice. There is no justice without truth.

Marc Little, a lawyer and pastor for the No Longer Bound Abortion & Miscarriage Recovery Ministry, said there is a reason for the unrest of recent days.

“What we’ve seen since the murder of George Floyd in Minneapolis is the unveiling of what has been percolating against the church,” he said. “Make no mistake: The body of Christ is the target of the Marxists, for [Marxism] cannot succeed when morality stands in the way. Morality brings clarity. The tool of the Marxists is confusion.”

He added that removing the monument would do nothing to help American society. “Remembering the past is the nutrition of education,” Little said, adding:

Monuments … like the Freedmen’s Memorial Monument intended to teach from a period of time in history and are often markers of American beginnings that allow us to appreciate the pain and victories of our journey as a nation and chart our course for tomorrow, united in our American tradition, bound together by commitment to one another.