Football Coach ‘Devastated’ After Being Suspended for Post-Game Prayer 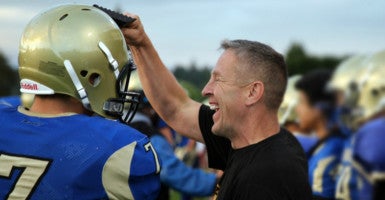 Washington state high school football coach Joe Kennedy, inspired by the Christian faith-based film “Facing the Giants,” walks to the 50-yard line after games to thank God for the players he has the opportunity to coach.

As of Wednesday, Kennedy has been suspended and is no longer able to participate in football program activities because of his post-game prayers.

A letter sent to Kennedy by the school district informed the coach that he has been placed on paid administrative leave.

“We tried to meet with the school officials in-person but they refused to meet,” Hiram Sasser, deputy chief counsel for Liberty Institute, said in a statement. “We were only able to have a brief hour and a half call with their lawyer, and the result was a letter banning private prayer just a few hours before last Friday’s game. It is unfortunate this school district is choosing litigation instead of a simple meeting.”

Kennedy is “devastated” over the ordeal. “I love my players and I hope I can continue coaching them and being a part of their lives,” he said, according to Liberty Institute.

Kennedy’s tradition started seven years ago when he thanked God for the game and the players after coaching his first game at Bremerton High School.

A few games into his private practice, students began to ask the coach what he was doing.

“I was thanking God for you guys,” Kennedy remembered saying to his players, according to a Liberty Institute statement. “Then a couple said they were Christians and asked if they could join. I responded, ‘It’s a free country, you can do whatever you want to do.’”

In the letter, Superintendent Aaron Leavell pointed to a policy that includes the following statement:

As a matter of individual liberty, a student may of his/her own volition engage in private, non-disruptive prayer at any time not in conflict with learning activities. School staff shall neither encourage nor discourage a student from engaging in non-disruptive oral or silent prayer or any form of devotional activity.

Kennedy was informed in the letter of standards that he is expected to adhere to, like not participating when students are engaged in religious activity as to not show “endorsement of the activity.”

He is free to provide “motivational, inspirational talks” to the students, but this does not include “religious expression” such as prayer.

“Coaches, students, and teachers don’t lose their religious freedom the second they step onto school grounds,” said Melody Wood, who works in the DeVos Center for Religion and Civil Society at The Heritage Foundation. “School bureaucrats should stop discriminating against people of faith engaging in completely voluntary prayer.”

On Oct. 14, Liberty Institute sent the school district a demand letter to inform the district that coach Kennedy is not in violation of any law. It states that Kennedy would continue to pray post-game.

The school responded to Liberty Institute by stating that the request to allow Kennedy to pray could not be met due to a “potential liability.”

Despite the order to cease prayer, on homecoming night, Oct. 16., Kennedy walked to the 50-yard line as he always does post-game.

“I’m going to do what I’ve always done and I will do my prayer,” KIRO-TV reported Kennedy stated.

Locals news outlets provided coverage of the post-game prayer as Kennedy found himself surrounded by Centralia Tigers football players—the opposing team—kneeling down with their rival coach.

The school district does not agree. “Any further violations will be grounds for discipline,” an Oct. 23 letter from Superintendent Leavell reads.

Kennedy continued his tradition by kneeling on the field to pray following football games on Oct. 23 and Oct. 26.

Kennedy and his legal team at Liberty Institute began to initiate legal proceedings against the Bremerton School District on Oct. 26.

In a letter sent to the school district this week, 47 members of Congress showed their support for the “admirable and respectable” actions of Kennedy, “as they represent his commitment to the welfare of the young  men on his team.”