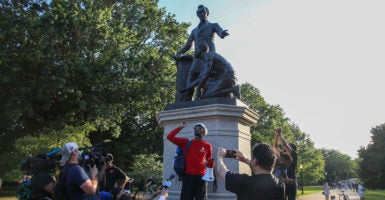 Protesters gather at Lincoln Park in Washington, D.C., on June 23 to demand the 144-year-old Emancipation Memorial be taken down. (Photo: Tasos Katopodis/Getty Images)

Protesters are threatening to tear down a statue in Washington, D.C., depicting President Abraham Lincoln freeing a slave.

On Tuesday, protesters surrounded the Emancipation Memorial in Washington’s Lincoln Park, the largest park on Capitol Hill, vowing, “Thursday at 7 p.m., we’re tearing this motherf—ker down,” as seen in a video in a tweet from Richie McGinniss, chief video director for The Daily Caller.

The National Guard is being deployed to protect monuments in the nation’s capital.

Some 400 National Guard troops have been deployed, and Clapper said that the troops would not be patrolling the areas all at the same time.

The Emancipation Memorial was erected in 1876, as a result of the efforts of Charlotte Scott from Virginia, who “used the first $5 she earned as a freedperson to start a fundraising campaign to build a statue in Lincoln Park,” according to the Park Service website.

Donations for the statue were only accepted from “from freed slaves, primarily African-American [Civil War] veterans, though a white-run war-relief organization called the Western Sanitary Commission coordinated the effort Ms. Scott started,” the Park Service added.

On Tuesday, congressional Delegate Eleanor Holmes Norton, D-D.C., tweeted, “The designers of the Emancipation Statue in Lincoln Park in DC didn’t take into account the views of African Americans. It shows. Blacks too fought to end enslavement. That’s why I’m introducing a bill to move this statue to a museum.”

In a statement provided previously to The Daily Signal, John Malcolm, vice president of the Institute for Constitutional Government at The Heritage Foundation, said that “police have a responsibility to respond to lawlessness, which does not include peaceful protest, but actual destruction or looting,” adding:

If police stand by and watch, if vandals are allowed to act with impunity, then it is going to keep going on until somebody stops it. If they come across someone destroying public property, it is incumbent on police to respond.

The Emancipation Memorial was dedicated on April 14, 1876, on the 11th anniversary of Lincoln’s assassination, “with over 25,000 people in attendance,” according to the Park Service.

Black abolitionist and orator Frederick Douglass delivered the keynote address at the dedication before President Ulysses S. Grant, his Cabinet, and members of Congress.

In his remarks, Douglass lauded the “exalted character and great works of Abraham Lincoln, the first martyr president of the United States.”