Texas Congressman Tours American Landmarks: ‘I Pledge to Defend Them!’ 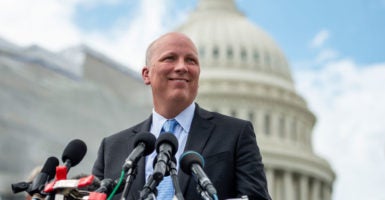 At a time when America’s monuments and statues are under attack from an angry mob, a Texas congressman took a road trip to personally visit and defend our nation’s landmarks ahead of the Independence Day holiday.

>>> Are You a #ProudAmerican? Here’s an Opportunity to Say Why

Roy posted short videos and photos throughout the day on Twitter, pledging his pride in America and vowing to defend the landmarks.

At Fort McHenry in Baltimore, Roy said he was proud to stand for the national anthem. It was in 1814 during America’s defense of the fort when Francis Scott Key wrote “The Star-Spangled Banner.”

“If you want to engage in canceling Thomas Jefferson or attack his statues or monuments,” Roy said, “we have a saying in Texas, ‘You better damn well be prepared to come and take it.’”

Finally, at George Washington University in the nation’s capital, Roy lamented an empty pedestal where a statue of America’s first president once stood.

Roy isn’t the only member of Congress speaking out in support of America’s history and heritage.

Sen. Mike Lee delivered an impassioned speech against the mob Thursday. He was offering a resolution condemning the violence when a Democrat colleague attempted to personally blame President Donald Trump. Lee objected and vowed to cut off government funding to anyone supporting the mob.

Last week, Sen. Rick Scott visited Lincoln Park in Washington, D.C., where an angry mob threatened to tear down the Emancipation Monument of President Abraham Lincoln. The mob was unsuccessful, blocked by law enforcement and opposed by an older generation of black Washingtonians.

“We have individuals in this country who are vowing to tear down this statue,” Scott said in a video posted on YouTube. “They are delusional, they are wrong, they’re ignorant about our history. This is anarchy. We’ve got left-wing mayors, left-wing governors who are sitting on the sidelines letting these things happen.”