Are You a #ProudAmerican? Here’s an Opportunity to Say Why 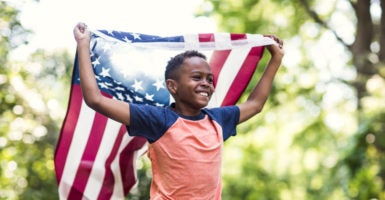 "The #ProudAmerican campaign will elevate the voices of patriotic Americans, and we hope to inspire generations of Americans to keep fighting for our country," says Jessica Anderson, executive director of Heritage Action for America. (Photo illustration: MoMo Productions/Getty Images)

Americans watching in shock, disbelief, and anger as mobs tear down statues, vandalize other property, and attack police officers now have an outlet to express pride in being part of our nation.

The Heritage Foundation and its lobbying arm, Heritage Action for America, are urging supporters and allies to record and submit short videos on why they are proud to be Americans.

“Americans today need to be reminded what makes our country so great,” Jessica Anderson, executive director of Heritage Action, told The Daily Signal in an email Thursday, adding:

As some in the media question the very core of our nation and spread the myth that America is fundamentally oppressive, we want to remind the nation that the opposite is true: We were the first country ever founded on liberty and equality. The #ProudAmerican campaign will elevate the voices of patriotic Americans, and we hope to inspire generations of Americans to keep fighting for our country.

Heritage also is asking participants to share those sentiments in their communities and on social media for Independence Day, using the hashtag #ProudAmerican.

“This great country’s principles are as relevant today as any time in our history,” Heritage Foundation President Kay C. James said, adding:

The #ProudAmerican campaign unites citizens across the country to show that we live in the greatest nation in the world. There is no better time than now—a year in which our nation has been in nearly constant turmoil—to gather around our shared belief in the ideas that have made us who we are. Let us all join together and thank God for the blessings of life, liberty, and prosperity that we enjoy as Americans.

“Ours is a nation that strives for the highest ideals of liberty and integrity, and we are privileged to live under a Constitution that affirms the inherent dignity and God-given rights of every individual,” a Heritage Action email to supporters says.

“We are blessed to call America home,” it adds. “Let’s make our pride for America go viral!”

One result of the campaign will be a professionally edited video with the #ProudAmerican theme, featuring highlights of the submitted self-made videos, for release in time for national July Fourth festivities.

Heritage Action is aiming its appeal at more than 20,000 Sentinels, activists across the country who support and spread the word on The Heritage Foundation’s conservative public policy solutions for national and international issues. The Daily Signal is Heritage’s multimedia news organization.

The appeal asks Sentinels to use their smartphones to record videos in which they briefly give their names, where they’re from, and why they’re proud to be an American. It also asks them to recite this portion of the Declaration of Independence:

We hold these truths to be self-evident, that all men are created equal, that they are endowed by their Creator with certain unalienable Rights, that among these are Life, Liberty and the pursuit of Happiness. —That to secure these rights, Governments are instituted among Men, deriving their just powers from the consent of the governed.

On the local level, Heritage Action has asked Sentinels to share what being an American means to them; to talk about the importance of the nation’s founding principles and documents; to express gratitude to those who serve or have served in the armed forces; and to thank local police officers, firefighters, and other first responders.

Americans can share such sentiments, the email suggests, by making and displaying signs in windows or on lawns; encouraging their children to get involved, perhaps with chalk messages on their driveways and sidewalks; and volunteering to serve in their local communities.

A short lesson with kids and grandkids about America’s founding principles can make a lasting impression: Perform the Pledge of Allegiance; sing the national anthem; read the Declaration of Independence; [and] discuss the importance of the Bill of Rights.

Other ideas include taking pictures of homemade signs and posting them online; sharing stories and memories that make them proud Americans; recording and posting their smartphone videos; and inviting others to join in “spreading positivity and why they are proud to be an American.”

“Whatever you do,” the email says, “just let others know that it’s OK to be a #ProudAmerican.”