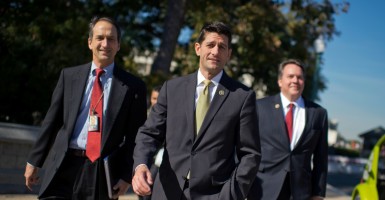 On Sunday, two members of the House Freedom Caucus explained the group’s majority support for Rep. Paul Ryan, R-Wis., to become the next House speaker.

The Daily Signal previously reported that the Freedom Caucus lacked the number of votes required to formally endorse Ryan for speaker, but a supermajority of its members have granted him their support.

On Fox News Sunday, host Chris Wallace asked Rep. Jim Jordan, R-Ohio, “You were going to demand all kinds of assurances from Ryan about changing House rules, almost none of which you got, so I guess the question is, why are you supporting Paul Ryan?”

“We do have a commitment from Paul to work on changing the rules, and we may get some of those changed before the vote this coming Wednesday and Thursday,” Jordan said. “So we think that’s a good step.”

Wallace asked Jordan if the group will retaliate against Ryan if he is “insufficiently hard-line.”

“We’re going to work with him, and we think we can come together as a group,” Jordan replied.

Jordan said that Ryan has a “big, bold agenda and vision” that he’s looking forward to passing in the House and sending to the Senate.

Rep. Mark Meadows, R-N.C., another member of the House Freedom Caucus, told Sunday Morning Futures host Maria Bartiromo said that there is “great respect” among his colleagues for both Ryan and Rep. Daniel Webster, R-Fla., who is also running for speaker.

“It’s not as much about the person as it is the process,” Meadows said. “We want to make sure that Washington, D.C. works for the millions of American citizens who believe that we don’t know how to govern.”

“It certainly is looking like we’ll have a Speaker Ryan,” Meadows continued.

Meadows called Ryan’s request to change a House procedure known as “the motion to vacate the chair” a “non-starter.”

“I don’t see us changing that except to perhaps make it a more open process within our conference, so there are no surprises,” Meadows said. “Chairman Ryan is working with us to see how we can address that particular issue.”

“There’s more that we agree on than divides us,” Meadows added.

Mike Needham, the CEO of Heritage Action, said on “Fox News Sunday that if Ryan wants to make changes, “he’ll have very strong support.” If “it’s going to be more of the same,” then he won’t.

“I think he wants to unite the party around big, bold ideas,” Needham added.