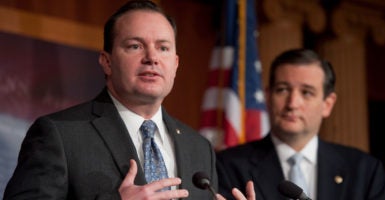 On the floor of the U.S. Senate Thursday, Republican Sen. Mike Lee of Utah delivered an impassioned speech condemning mob violence in the United States. Lee offered a resolution, which his Democrat colleague, Sen. Bob Menendez of New Jersey, attempted to amend by inserting language attacking President Donald Trump. Menendez then repeatedly tried to silence Lee. Sen. Ted Cruz, R-Texas, served as the presiding officer and overruled Menendez. A lightly edited transcript and video are below.

Sen. Mike Lee: As I look at the language proposed by my colleague from New Jersey, I could accept the rest of it except for the words, “especially, the president of the United States.” The rest of it is unobjectionable.

The point here is that without pointing to any one specific individual, we should all be able to acknowledge as a sense of the Senate that we do hold these truths as self-evident. That our country was founded on these very strong ideals.

Even if, as the resolution itself acknowledges, we have failed at times to live up to them, we’ve still done it. I’d accept the modification, but only with the removal of the words, “especially, the president of the United States.”

What’s happening here? This is the U.S. Senate. Just so everyone is clear about the insanity that we just witnessed.

I just proposed a nonbinding resolution condemning mob violence and Senate Democrats objected. I don’t know whether to be outraged or embarrassed for them.

By the way, what about the mayor of Seattle? What about the City Council of Minneapolis? What about a countless other people who have perpetuated, or enabled, or facilitated or coddled mob violence across the country?

It’s one of the reasons why we’re not going to engage in this task of making it a political tit-for-tat—it’s not that.

People are being shot, businesses are being looted, innocent Americans are being attacked and threatened.

Lives are being ruined, communities are burning, literally burning.

So whose side are you on?

This resolution was designed to be unifying it and avoided—

Sen. Bob Menendez: May I ask the presiding officer to remind us of Rule 19?

Sen. Ted Cruz: The chair will remind senators of both parties that Rule 19 provides that no senator in debate shall directly or indirectly by any form of words, impute another senator and other senators, any conduct or motive, unworthy, or unbecoming of a senator.

Lee: The resolution was designed to be unifying. It avoided controversial subjects. All it asked of us was basic dignity and respect.

But apparently that’s too much to ask today. I guess we should be thankful for clarity. Now we know we don’t have to ask.

They told us how they feel about this resolution. You can’t really oppose this, it seems to me without being on the side of the mobs, of mob violence, of mob mentality, of cruelty, and intolerance and terror.

Menendez: Mr. President, parliamentary inquiry. Is this line not in direct violation of Rule 19?

Cruz: The chair concludes that pointing out that mob violence is dangerous to our nation is not contrary to Rule 19, or any other rule of this Senate.

Menendez: Further parliamentary inquiry. There’s not a question of mob violence. The question is that imputing to members who did not agree with the framework and language of this resolution, that they are supporting mob violence. That must be in violation of Rule 19. If this is going to be a deliberative body.

Lee: Failed by an education system, and addled by a social media culture that taught them to be victims instead of citizens. A privileged self-absorbed, crime syndicate with participation trophy graduate degrees, trying to find meaning in empty lives by destroying things that other Americans have spent honest, productive lives building.

I want all my colleagues to know that when we returned from recess, we’re coming back to the Senate floor and we’re not just going to be debating nonbinding resolutions.

It’s long past time to expose the shiftless idiocy of the anti-American, anti-science, anti-establishment, anti-Constitution mob, and remove their snouts from the federal trough.

Colleges and universities that punish free speech and discriminate against conservative and religious students.

City councils who defund their police departments and refuse to protect public safety.

States that force doctors to mutilate confused children without their parents’ consent.

School districts that embrace the ahistorical nonsense of the 1619 Project.

The smug sneering privilege of all the above and much more, the whole garbage fire that is the so-called “woke ideology” depends on federal money.

The mob hates America on America’s dime. It’s time to cut off their allowance.

I think the American people would be very interested to know who stands for them and who stands for subsidizing the mob. I intend to show them. Mr. President, this debate is not ending today. It’s only the beginning.

All I asked in my counter was that we removed the words, “especially, the president of the United States.” Why? Because that’s different than the entire approach taken by the resolution.

As long as we’re calling each other out on casting aspersions on each other’s intentions, no one’s intention here to shield anyone from anything.

As evidenced by the fact that as my proposed modification would have provided, it would have said, “Our elected officials should not incite violence or legitimize those who engage in hate fueled acts.”

Last I checked, the president of the United States was and is an elected official. This would apply to him. My counter in no way insulated, not him, not any elected officials, not any of us from this resolution, which simply condemns mob violence.