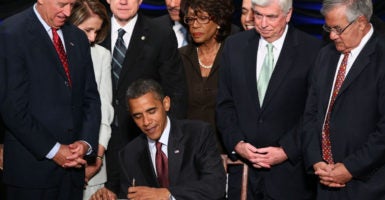 In 2010, Congress passed the Dodd-Frank Act, which, among other things, created a bureau to administer and enforce a broad array of consumer protection and banking laws and put it under the control of a single director. Pictured: President Barack Obama signing the Dodd-Frank legislation. (Photo: Win McNamee/Getty Images)

The Supreme Court on June 29 held

that the structure of the Consumer Financial Protection Bureau violates the constitutional separation of powers, but held that its unconstitutional structure can be fixed without scrapping the entire agency.

In 2010, Congress passed the Dodd-Frank Act, which, among other things, created the bureau to administer and enforce a broad array of consumer protection and banking laws and put it under the control of a single director.

The director serves for a term of five years, and could not be removed from office except for “inefficiency, neglect of duty, or malfeasance in office.”

The plaintiff in the case, Seila Law LLC, sued to stop the Consumer Financial Protection Bureau from investigating it on the grounds that the bureau’s structure violates the separation of powers.

It argued that the bureau’s director must be accountable to the president; otherwise, he or she is unlawfully wielding the executive power, which properly belongs only to the president.

In a victory for the separation of powers, the court agreed.

For one thing, it noted that the bureau’s structure is “a historical anomaly.” With the exception of the Social Security Administration and the Federal Housing Finance Agency, which wield far less executive power than the Consumer Financial Protection Bureau, all other single directors of regulatory agencies can be removed by the president at will.  (As an aside, the court also cast doubt on the constitutionality of the structure of those two agencies).

There’s a reason such a structure is so rare: It’s explicitly forbidden by Article II of the Constitution.

The court, in an opinion by Chief Justice John Roberts joined in relevant part by Justices Clarence Thomas, Samuel Alito, Neil Gorsuch, and Brett Kavanaugh, explained that if the president cannot remove from office those people under him who wield his executive power, then “the president could not be held fully accountable for discharging his own responsi­bilities; the buck would stop somewhere else.”

Why is that bad? Because the place where the buck stops is not accountable to the democratic process. You can’t vote the head of the Consumer Financial Protection Bureau out of office. You can, however, vote the president out of office.

That’s why the president must be accountable for all of the executive power.

The bureau’s director, however, was not accountable, either to the people or to the president. He or she could wield significant executive authority without any meaningful accountability.

The court put it this way: “With no colleagues to persuade, and no boss or electorate looking over her shoulder, the Director may dictate and enforce policy for a vital segment of the economy affecting millions of Americans.”

But how to fix it?

Seila Law argued that the entire Consumer Financial Protection Bureau should be scrapped. It argued that it’s impossible to sever the part of the Dodd-Frank law that set up the structure of the bureau from the rest of the statute, so it all had to be struck down.

The court disagreed, explaining that if it simply cut out the part of the law that limited the president’s ability to fire the director, the rest of the statute would still work just fine. The result is that the bureau will continue to operate, but now the president can remove the director at will.

Justice Elena Kagan, joined by Justices Ruth Bader Ginsburg, Stephen Breyer, and Sonia Sotomayor, agreed that the provision was severable, but argued that the bureau’s structure was constitutional to begin with.

In her view, the Constitution gives Congress the ability to “structure administrative institu­tions as the times demand,” with the only limit that “the President retains the ability to carry out his constitutional duties.”

That approach, however, blurs the lines between the separate powers of our three branches of government and, what’s more, would elevate the administrative state nearly to the status of a fourth branch of government—one virtually unaccountable to the people.

Thomas, joined by Gorsuch, concurred that the bureau’s structure was unconstitutional, but dissented from the conclusion that the court could fix it by essentially rewriting Dodd-Frank. In his view, the court lacks the power to “excise, erase, alter, or otherwise strike down a statute.”

Courts, he wrote, decide only the cases before them, so the proper remedy here would be to simply invalidate the investigative demand that the bureau sent to Seila Law.

Thomas is concerned that, over the years, the courts have given themselves the power to rewrite laws—a power that the Framers never intended them to have.

If this critique sounds familiar, it’s because both Thomas and Gorsuch have made similar arguments in the context of nationwide injunctions. Those are injunctions handed down by lower courts that strike down a law anywhere and everywhere. Such injunctions are a radical departure from the traditional powers of the courts.

It’s safe to say that the drumbeat they have started will only continue to get louder.

At the end of the day, Seila Law is a welcome victory for the separation of powers. And Thomas’ dissent is an encouraging reminder that at least two justices are eager to rein in the judiciary’s runaway powers.