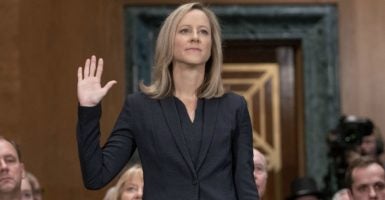 Kathleen Kraninger is sworn-in to testify before the United States Senate Committee on Banking, Housing, and Urban Affairs on her nomination to be director of the Bureau of Consumer Financial Protection on Capitol Hill in Washington, D.C., on July 19. (Photo: Ron Sachs/SIPA /Newscom)

The Trump administration has nominated Kathy Kraninger to be the next director of the Consumer Financial Protection Bureau, and Roll Call reports that her confirmation hearing was “as politically contentious as it’s gotten in the last year and a half” on the otherwise “senatorial Senate Banking Committee.”

Ignore the political drama. The real story is the fact that the bureau has been making some very positive changes under acting Director Mick Mulvaney, a founding member of the House Freedom Caucus.

To be clear, the bureau should not exist. It was created based on the false premise that there was insufficient consumer protection law prior to the 2008 crisis, and that evil lenders preying on unsuspecting borrowers caused the mortgage meltdown. Mortgages are not, despite Sen. Elizabeth Warren’s claims, anything like faulty toasters, and more than 20 federal consumer financial protection statutes existed prior to 2008.

Furthermore, the crisis itself was caused by too much government, not too little.

Congress should never have created a new federal agency, much less one with the bizarre (possibly unconstitutional) structure that it gave the CFPB. At best, Congress should have consolidated authority for the 20-plus federal consumer financial protection statutes that existed prior to 2008 at the Federal Trade Commission, the federal agency already charged with consumer protection.

The Trump administration cannot, of course, get rid of the bureau or transfer authority to the FTC without congressional action. It can, however, appoint a new director—for a five-year term thanks to the short-sightedness of the Democrats—to build on what Mulvaney started.

Here is a list of seven recommendations for the next director of the CFPB.

The bureau was created with a clear bias against financial services companies. The agency’s architects seem to believe that this bias made the agency consumer friendly, but such a view ignores the fact that businesses can only succeed by making their customers happy.

There is no doubt that Americans did not need—and do not need—this government agency. As long as they’re stuck with it, though, the bureau should be consumer friendly by working to benefit all Americans, even those that make loans.