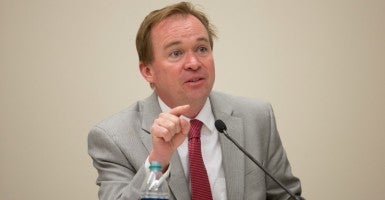 Rep. Mick Mulvaney, R-S.C., complains that the NRCC has created an "internal conflict" inside the party. (Photo: Willis Bretz for The Daily Signal)

An LGBT measure threatening the House appropriations process has exposed old fault lines inside the Republican conference while also forging a pragmatic alliance between leadership and conservatives.

The amendment introduced by Rep. Sean Patrick Maloney, D-N.Y., doomed an energy and water spending bill before Memorial Day—but only after 43 Republicans bucked the party line to vote for the measure before the underlying legislation failed.

Supporters describe the amendment as an effort to stop federal contractors from discriminating against members of the LGBT community on the basis of sexual orientation and gender identity. Opponents characterize the measure as a violation of conscience rights.

Members of the House Freedom Caucus are angry that the National Republican Congressional Committee, the party’s campaigning arm, has disproportionately supported the majority of those 43 Republicans in past elections.

“You talk about the internal conflict as a party,” Rep. Mick Mulvaney, R-S.C., said of leadership’s regular solicitations for donations to the NRCC. “They’re asking us to give money to an entity that gives our money to folks who vote exactly opposite of us on this.”

The NRCC did not respond to phone and email requests for comment from The Daily Signal.

But the Idaho Republican seemed more concerned about Speaker Paul Ryan’s parliamentary dealings than allocation of the GOP’s war chest. “What we were concerned about,” he explained, is that leadership was “using the structure of the rules to help the minority with their ideas and not help conservatives in the party.”

Conservatives and leadership may have come to an accord that would require the Freedom Caucus to concede on their long-held demand for an open amendment process. On Thursday the group seemed prepared to accept leadership’s proposal to advance amendments to spending bills according to structured rules.

Currently, under an open rules process, any member can introduce an amendment on the House floor like Maloney did. To keep that from happening, Republicans are considering what’s known as a structured rule on spending bills. That would allow leadership to stop the Maloney amendment by ruling it out of order.

“The rules are being used to prevent the Democrats from shipwrecking the process,” Mulvaney explained, but “without preventing conservatives from having their amendments also.”

In the past, under former Speaker John Boehner, R-Ohio, conservative amendments were often ruled “out of order” and stripped from legislation.

But now under Ryan, conservatives have more leverage. The roughly 40-member Freedom Caucus can use its numbers to move and block spending bills in the House.

“The carrot is we will be there for y’all on these appropriations bills if we get a chance to have some of our amendments,” Mulvaney said, describing conversations between leadership and conservatives. “The stick is if you don’t let us have our amendments, you can’t bring a bill to the floor without a rule vote.”

And Labrador thinks conservatives have an ace up their sleeve. He explained to The Daily Signal that “what’s great about this” is that Democrats won’t vote for a structure rule to end the gridlock.

As a voting bloc, that means the Freedom Caucus can impact whether a structured rule is approved, and therefore, a bill advances. “If they [leadership] plays tricks with us, we can take down the rule.”

Rep. Tim Huelskamp, R-Kan., said that the GOP should set House rules because “Republicans run the institution and Republican amendments should be made in order.”