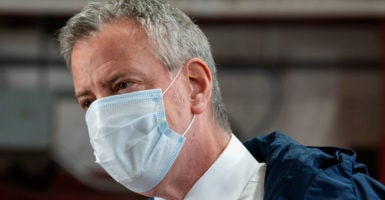 For the second time since the COVID-19 pandemic became a daily battle between disease control and civil liberties, New York Mayor Bill de Blasio has taken to Twitter to criticize the peaceful assembly of Jews in a city that boasts over a million Jewish residents.

Just a few weeks ago, the mayor slammed his city’s Jewish community for gathering to grieve at a large funeral for a beloved rabbi.

Writing for The Daily Signal, I said de Blasio’s behavior was un-American and unconstitutional. His tweet Monday is not much different, and unfortunate on several fronts.

For starters, New York City was undoubtedly the epicenter of the COVID-19 pandemic and two boroughs with a significant Jewish population, Brooklyn and Queens, were the hardest hit by the disease.

Many of these devout religious people have suffered along with their loved ones, either from the coronavirus itself or months of strict quarantine, a difficulty in and of itself in a crowded city such as New York.

This is not to say that Jews or anyone else should defy shelter-in-place orders, only that religious believers have paid their proverbial pandemic dues while trying to balance their commitment to their faith, and that is admirable.

Even though city officials have extended stay-at-home orders until at least June 13, exasperated citizens have slowly pressed the boundaries of these executive orders.

On a nice sunny day, many groups, faith-based or not, enjoy themselves outside or at restaurants, or, as these young people were, studying Jewish texts at yeshiva.

As careful as people want to be and were, especially at the beginning, urban life is hardly conducive to an eternal quarantine and New York City is hardly a model of restraint: Residents simply were not going to be physically, mentally, or spiritually able or willing to be locked down forever.

Yet de Blasio fails to direct his ire at the crowds of young people gathering at a park or outside restaurants or in the city streets. Instead, the mayor consistently targets the Jewish people. It’s morally abhorrent, fiscally stupid, and still un-American.

How is a crowd of 60-plus young people studying Jewish texts at a school any more of a public nuisance than crowds at Prospect Park? The answer, of course, is that they are not.

But these are a people of devout faith and the subject of concentrated, increasing anti-Semitism and even violent anti-Semitic attacks, as this piece in The New York Times recounts in horrifying detail.

If de Blasio and other officials want to keep the city on lockdown for nearly another month, they are going to have to come to terms with the fact that there is little precedent for such a broad ban of civil liberties spanning several months.

De Blasio might want his New York to be a bastion of freedom, commerce, creativity, and success—as its reputation surely reflects—but he again has targeted some of his own residents for their faith.

These two things do not go hand in hand, especially for people who draw from their faith the strength, courage, and inspiration to make America creative and successful.

In the late 1800s, Americans of all faiths flocked to New York City to pursue their dreams. How unfortunate that this very city would come to reflect a particular religious bigotry and that people of faith there would need to shield themselves from verbal attacks on their faith by the city’s elected leaders.

Americans’ right to free exercise of their religion is basic to a foundation of other equal and powerful rights, including the right of assembly.

What’s worse is that de Blasio knows this and he casts it aside just as Brooklyn residents are shrugging off the newest quarantine extension.